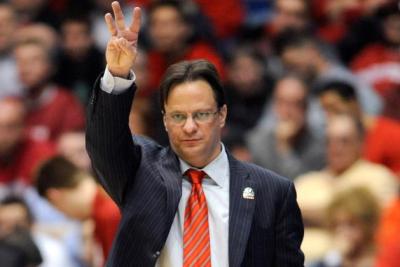 Indiana Athletic Director Fred Glass will wait until the season ends and then evaluate the basketball program.  The decision will be made to either retain Tom Crean as the basketball coach or relieve him of his responsibilities.

There are two sects of Indiana Basketball fans – those who view Crean as the hero of IU hoops who rode in on a white horse to save the program during its darkest moment with diligence and excellent recruiting, and those who see him as an overmatched schemer whose hyperactivity and inability to teach defense has frustrated players and fans.

Somewhere in the middle lies the truth.

Indiana will play the final home game of a very disappointing season tonight against Northwestern, a team enjoying its finest year.  Indiana is 5-10, in 13th place among 14 teams in the Big 10.

For many fans who spend the majority of their idle time ruminating about Indiana Basketball, the result of a season that began with such promise is unacceptable.

Let’s take a quick look at the pros and cons or firing and retaining Crean to see if we can find a little clarity or common ground.  Here are five reasons – in no particular order – to hold on to Crean:

Okay, let’s compare the reasons to keep Crean with some that call for a regime change:

The distilled result of the five reasons to replace Crean is an apathy among longtime fans and donors that might compel action.