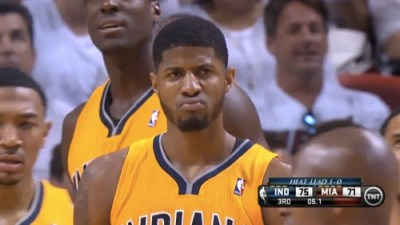 Paul George is as frustrated as many valuable employees are when they learn they are just employees.

There comes a time in every man’s life when he learns who he is and where he stands – when he finds that he is not truly a member of the club despite being told of his importance to its members.

He learns that an employer’s actions speak louder than words.

That time for Indiana Pacers all-star Paul George came as Thursday’s NBA trade deadline drew near as the Pacers shopped him around to other teams.

George did not like being kept out of the loop, ““I kind of was on the ropes just like you guys were on what was about to happen.  It was kind of a dark moment of uncertainty. That was the frustrating part. You want me to be your guy here, I thought I would be in the loop a little more than that.”

George needs to understand two things – his last name is not Simon – as in the name of the family that owns the Pacers – and he is a worker bee in the Pacers organization.

As the best player on the Pacers, a mediocre team with a 30-28 record and not a single championship in its NBA history, George wants his seat at the big boy table where the decisions get made.

LeBron James has a seat at the Cleveland Cavaliers table earned through consistent greatness.

James can make roster demands because he is by far the most valuable player in the NBA.  James has gone to the NBA Finals in each of the last six seasons, and won three championships.  He will retire as one of the top five basketball players of all-time.

While he is a splendid basketball player, George is not the kind of player who can barge into an oak paneled conference room and make demands.  Paul George is not LeBron James.

George is the CEO/owner of PG13 Enterprises or whatever his company is called.  He sits at the head of that table, and can call the shots as he sees fit.  With the Pacers, he is an employee – an exceptionally well-paid employee whose value may be greatest in a swap for other employees.

That is an uncomfortable position for a 26-year-old who gets his way everywhere else but in among upper management at Bankers Life Fieldhouse, and his frustration with the Pacers may lead team president Larry Bird to decide that George should be dealt before he can exercise that frustration by bolting for Los Angeles as a free agent.

George learned a valuable lesson this week.  Regardless of his unique gifts as a basketball player, he is still an employee – an asset on ledger controlled by others.

That hurt for George this week – just as it hurts when the same reality is visited upon us as we bang our heads on the ceiling that exists for all employees.