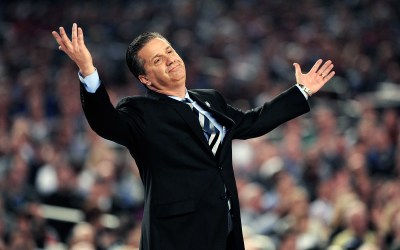 No one in sports is as clumsy and obvious in banging his own drum while defending others as Kentucky head basketball coach John Calipari.

Listening to Cal whine about how college basketball coaches paid millions to educate and lead students are victims in our society is either nauseating or funny depending upon your ability to laugh at self-importance.

Last night, after Kentucky posted a hard-earned win over Georgia, Calipari opined about the state of coaching and how Georgia coach Mark Fox is doing a great job.  Sadly for Fox, Calipari is not Georgia’s athletic director.

No one would argue that building a top tier program at a football school like Georgia is tough as hell for Fox or any other coach, or that NC State retaining Gottfried to finish the season post-termination is idiotic.

The messages about his peers aren’t offensive, unless you are the AD at either Georgia or NC State – it’s the way Calipari paints himself as a victim through his membership in the fraternity of coaches that’s irksome.

As is always the case with the self-immersed, Calipari begins his rant with empathy, turns toward trying to inspire pity, and finishes close to where his good intentions began, “They do this to us without Maten.  That’s what kind of coach Mark Fox is. So again, ‘Well, we want to win more.’ No kidding. We all want to. Live with my shoes. You want to win more? We gotta win by 25 or we got problems. We win by two or in overtime, people are jumping off bridges. So we all want to win, but it’s about what kind of coach he is, what kind of man he is.”

Just to prove burying the whine beneath defense of others is a strategy and not a one time slip, Calipari said this about Gottfried, “What if Mark Gottfried goes on a run at the end and gets to the NCAA tournament, which he was in four out of five years? Two Sweet 16s, which is not done at NC State. What happens if he now — if he goes and wins and gets another team [in]? He had good players but they’re young, they’re like my team. It’s hard to do this with young guys.”

Doing what Gottfried tried at NC State IS tough, but there are 350 NCAA Division One coaches who would swap rosters with Calipari virtually every season.  Maybe not Duke or Kansas, but damn near everyone else would do it without a second thought.

Calipari aligning himself with Fox and Gottfried was about Calipari and only Calipari.  Listen for the self-serving blather next time you listen to Calipari, and you’ll understand the disdain many have for him

The acrimony toward Calipari from peers, (off the record, of course), and fans has very little to do with his success, although that’s what Calipari and his sycophants always claim.

Nobody begrudges Villanova’s Jay Wright his success, and over the last four years, Wright’s teams have posted a 123-15 overall record, have won the Big East all four years with a record of 61-8, and won a National Championship.

Calipari is 115-26 over the same period with a 54-13 record in the SEC (a basketball conference inferior to the Big East), and a single trip to the Final Four.

If it was about success, people would loathe Wright.  I’ve never heard anyone say a negative thing about him.

Whether fans love or hate him, there is no denying that Calipari loves himself.