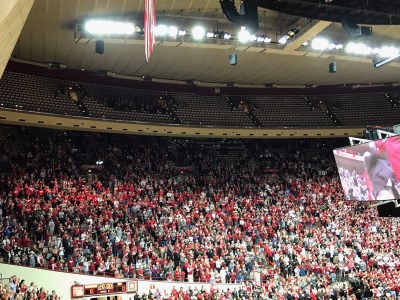 Local and national pundits can disagree why this balcony at Assembly Hall is regularly empty, but no one can disagree THAT it is empty

One of the best parts of hosting a sportstalk radio show everyday is that I get a chance to talk to local and national experts on all kinds of things.

It’s college basketball season and this is Indiana, so I spend a lot of time talking to guys who know a lot about college hoops.

Indiana is in the midst of a miserable season and fans want answers as to the cause and correction.  And so I ask the questions.

What has happened to turn a Big Ten Champion into a Big Ten doormat?  I’m not quite that crass in my wording, but why has Indiana evolved into what it is from what it was is the gist of the thing.

Local IU hoops experts point at Tom Crean as the architect and implementor of the program.  They talk about an inability to recruit in Indiana, schematic simplicity, ill-fitting pieces, astronomical turnover numbers, and an overall lack of understanding of how to defend.

Local guys talk about Indiana being a mostly ordinary program that might enjoy the fruits of a national brand like Duke of Kentucky despite results more like West Virginia.

National guys call the coaching position at IU “a top five job,” but then say a coach like Archie Miller at Dayton would likely pass if he were offered the job.

Local guys will tell us that Indiana has a Big 10 record over the last four years of 37-33.  National guys talk about the two Big 10 C championships.

I’m not sure what causes the disconnect between local and national guests, but the answers from the national guys are entirely predictable.

The question that is left without an answer is why the national pundits are less likely to embrace the notion that the life cycle of the Crean Era is coming to an end than the locals.

Is there a personal anti-Crean enmity among the locals, or a positive embrace by the nationals – or both?  Maybe it’s neither.  Maybe Indiana’s propaganda has effectively painted a picture for the national guys, while the locals saw this team up close and personal before Anunoby got hurt.

Not sure there is anything to be gleaned from a discussion of the obvious but honest difference of opinion, but I find it interesting every time I talk to a local or national expert.  The answers are quite predictable, but no less fascinating.

That’s why I enjoy the perspective of informed guests despite having my own focused thoughts on the unraveling situation at IU, and that’s why you listen.

In the end, it likely doesn’t matter a damn.  Athletic Director Fred Glass is the guy who will make the call on whether Crean comes back, and he’s a big boy who makes decisions without the input a the media.