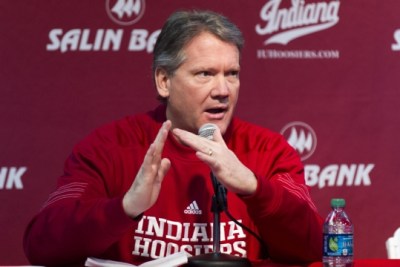 Indiana was presented with a no-win scenario.  They chose bad option B over Bad option A.

Two weeks ago, Glass had to choose whether Indiana should host a first round NIT game at Simon Skjodt Assembly Hall or go on the road.  This was contingent upon Indiana not playing well enough to be invited to the NCAA Tournament, but succeeding to the extent they qualified for the NIT.

Neither choice was inviting.  If Indiana chose to host, it was likely the Hoosiers would play in a mostly empty Assembly Hall for two reasons – it would fall during spring break, and the majority of Indiana fans do not care about the NIT.

Fans see an invitation to the NIT as a failure, and that is especially true during a season when Indiana found a way to beat Kansas and North Carolina early in the season, but lost 12 games to Big 10 opponents.

The second option was difficult to embrace because passing on the opportunity to host a tournament game against a quality opponent is virtual treason at Indiana.  Choosing to travel instead of play at home runs counter to logic.  The Hoosiers are a competent team at home, and routinely unsuccessful on the road.

The driver of the decision was the lasting damage of social media reports and photographs of a sparse – and frustrated – audience.

One of the remaining great selling points of IU Basketball is the passionate fan presence throughout the season.  Corrupt that, and all might be lost.

In 2005, the crowd for a similar game was reported to be less than 4,000, despite upwards of 7,000 tickets being sold.  That crowd – and the empty seats’ representation of apathy – was the final straw for then coach Mike Davis, who lasted one more very long year.

Since 2005, social media has exploded as each of us with a smart phone travels with a camera and multiple platforms for sharing photos, and it’s likely the pics of all those empty seats would haunt the Hoosiers program for decades.  It would be seen as the all-time nadir for Indiana Basketball, and the damage would be to the foundation of the program.

Playing on the road would be a fixable and forgettable issue – more along the lines of a shattered window.

At least that’s what Glass determined after IU’s team forced him in this unenviable position through its mediocrity.

There was no positive road out of this, and the decision was made to take lumps now rather than invite longterm scorn in-perpetuity.

One road led to a gang of thugs waiting to beat the hell out of Indiana Basketball, and the other led to a cliff over which the Hoosier program might drive.

No one likes getting the crap kicked out of them, but those wounds heel.