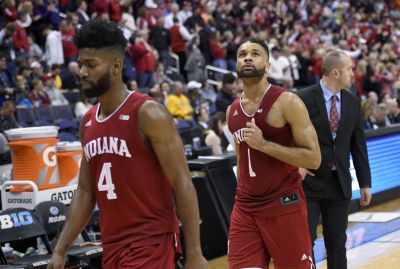 Indiana walked off the floor last night unable to win a second game in the Big 10 Tourney for the 14th straight season.

So now Indiana fans look ahead to Selection Sunday to find out where the Hoosiers will play in the NIT.

After the false promise built on the spindly legs of early season victories against Kansas and North Carolina, the Hoosiers backtracked into a season where on-court confusion was such a consistent presence, it appeared to be part of the game plan.

After last night’s loss to Wisconsin in the quarters of the Big 10 Tournament, Indiana’s record for the 2016-2017 season against teams ranked in the top 200 by Ken Pomeroy dropped to 10-15.

I could go on with an extended litany of reasons the Big 10 Tourney is an unholy event that is dreaded like no other for Indiana fans, but why belabor the obvious.  For whatever reason, and regardless of the coach, the Hoosiers suck at this annual midwestern (sort of) celebration of hoops.

Let me just add this one note.  If Indiana earned a double bye and won each tournament and Michigan State won only one game per tourney, it would take the Hoosiers eight years to catch Sparty as the all time leader in wins.

This will be the Hoosiers fourth trip to the NIT, and the first in 12 years.  They won the event in 1979 in a thrilling 53-52 final against Purdue at Madison Square Garden.  Indiana lost a final against Reggie Miller’s UCLA team in 1985.  IU lost in the first round in both 1972 and 2005.

Indiana fans remember the NIT game 12 years ago against Vanderbilt, not for anything that happened on the court, but for the thousands of empty seats at Assembly Hall left unfilled by apathetic fans who decided their time, money, and energy were better invested somewhere else.

That lack of a crowd was the last straw for IU’s athletic administration who knew nothing about basketball, but were smart enough to understand empty seats equals a lack of passion and that equates to a lack of dollars from well-heeled donors.

It took IU AD Rick Greenspan another year to make the change from coach Mike Davis to Kelvin Sampson, but the writing was on the wall after that loss to Vanderbilt.

Whatever Indiana’s fate in the NIT draw, and they are going to the NIT, as here is no chance the #41 team in the country as ranked by Pomeroy is going to be excluded, I hope the seats are filled at Simon Skjodt Assembly Hall.

The players work hard, and playing what might be their final game together in front of empty chairs and bleachers would be a shame.

Regardless of what happens from this point forward, there is no denying these facts about IU hoops over the last 15 years:

Yes, three of the seasons right in the middle of that 15 year span were rebuilding years we tend to forgive because putting Humpty Hoosier back together again was quite a process, but they exist.

7 thoughts on “Indiana going to the NIT, and fans dazed by decade and a half of mediocrity”