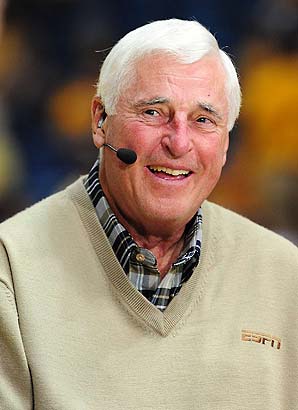 My Dad was a guy who liked to say outrageous things, and then when people became upset he never understood, “Why are they worried what I have to say?”

I would think, “Words have power.”  I wouldn’t say it because you didn’t poke the bear.

Amusing himself and the people who shared his unique wavelength fueled Dad’s penchant for going way beyond reasonable.  Those who didn’t understand thought Dad was cruel, angry, and intolerant.

One friend of my parents once said to my Dad, “I don’t know anyone I hate as much as you that I enjoy being around as much as you.”  That summed it up pretty well.

Bob Knight seems to have been wired for the same level of both amusing and providing outrage.

On the Dan Patrick Show this morning, Patrick asked Knight about going back to Indiana University as a way to bring closure to fans and himself.  Here was that exchange:

DP: I know this may not be on your wish list, but the fans [want closure in Indiana].
BK: I’ve always really enjoyed the fans and I always will. On my dying day I will think about how great the fans at Indiana were. As far as the hierarchy at Indiana University at that time … I have absolutely no respect whatsoever for those people . And with that in mind, I have no interest in ever going back to that University.

DP: Aren’t most of those people out of there, Coach?
BK: I hope they’re all dead.

DP: I know some of them are.
BK: I hope the rest of them go.

Oh boy!  And so again Knight is in the news.  He said something outrageous, and people are yelping about his cruelty instead of the quality of his work as a coach for 29 years at Indiana.

Clearly, Knight cares very little about those easily disturbed souls who whine and moan about how his comments reflect a troubling indifference to the lives of those he continues to blame for his clumsy firing nearly 17 years ago. Those include the late Myles Brand, who was the president of Indiana University when Knight was canned.

Knight understands that hoping people die is different from killing them – or even causing them any harm.  His penchant for the bombastic will again put his name in the news as he sells tickets for a variety of events in central Indiana over the next month, including an autograph signing, a joint appearance with Gene Keady in Carmel, and a speech at Bloomington North High School.

As you judge Knight for his silly comments today, you should take the time to watch “Perfect in ’76” tonight on Showtime.  it’s a documentary about the undefeated Indiana team in 1976 that was Knight’s masterpiece.  You will be reminded that he is more than the guy who threw the chair, punched the Puerto Rican cop, and put his hands on Neil Reed (who is also dead).

Knight was a great coach.

Sure, he can be an unrepentant jerk – an obscene and arrogant oaf who finds the sound of his own voice the most amusing thing imaginable.  He can also teach the game of basketball like very few in the game’s history.  He is a valued friend and mentor to many who played for him.

He will always be hated and loved, scorned and respected, bludgeoned and comforted.

That’s Bob Knight, and that was my Dad.  There is no moderating Knight, just as guiding my Dad to the middle never worked.

And that’s both too bad if you don’t get it, and too funny if you do.