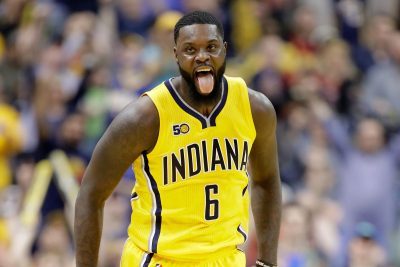 Lance Stephenson can be a force for good – or not. Guess what he was last night.

Two rules in life I never break – never invite crazy to the party and never poke the bear.

The Indiana Pacers violated the second of those rules last night because they violated the first on March 30th.

Pacers president Larry Bird invited crazy to the party when he signed Lance Stephenson to rejoin his old team, and ol’ Lance poked the bear last night when he hit a three-pointer with 4:36 remaining in the third quarter to give the Pacers a 20-point lead.

When crazy is shows up at the party, everyone has the best time of their lives while the good part of the kook entertains.  That’s been Lance for the first eight games he was back with the Pacers.  He’s been entertaining, unpredictable, emotional, and compelling.

After hitting the three-pointer, Stephenson turned to the Cavs and yelled several variations of, “This is our ****ing house.”  I turned to friends with whom I was watching the game, put my head in my hands, and quietly told them the game had just ended.

Predictably, LeBron James and his Cavs responded with a 14-0 run, and never took their foot off the gas as they won game three of this perfunctory and unnecessary series 119-114.

Lance is fun.  Lance has juice.  Lance made the Pacers fun to watch for the last three weeks.  But Lance got the Pacers beat last night because he lit a fire under LeBron James, and that fire burned the Pacers down.

That’s what happens when you invite crazy to the party.