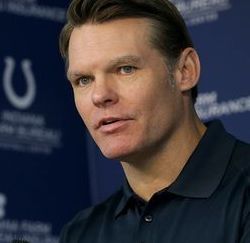 Chris Ballard seems humble, curious, and eager to establish a culture of accountability with the Colts.

Chris Ballard is going to be successful as the general manager of the Indianapolis Colts.  Really successful.  Championship level successful.

I have no idea what his first draft board looks like or whether he has a secret sauce that allows him to recognize hidden talent others miss. What we are learning about Ballard as he spends more time with the media is that he understands that building culture is the most important point of differentiation separating good and great teams.  He is also very humble.

He seems in many ways to be the polar opposite of the man he replaced.  Another check.

There are two kinds of managers in business and sports – the person who surrounds him or herself with sycophants, and walks into meetings eager to convince everyone he or she is the smartest person in the room.  Then there are those who build a team of smart people who bring challenging ideas into a conference room because they will provide the best results.

Managers who covet being seen as the smartest in the room don’t always lose to the curious, but arrogance is penalized over time, and Ballard is not arrogant.

Extreme success is an excellent breeding ground for insecurity based arrogance, and Ballard is one of 32 men on the planet who gets to run an NFL franchise.  That’s extreme success.  Somehow, insecurity has yet to infest Ballard.  That’s a refreshing change at the Colts Complex.

Here is a quote from the Ballard press conference yesterday that shows what Ballard values, what kind of people he wants to employ, and that he’s willing to accept the ideas of others as acknowledges that he doesn’t know everything:

“Really interesting to read about character and how Theo (Epstein) – baseball was getting flat in terms of the analytics and the edge that they were getting from the numbers. So he kind of took a different approach with character. We want high character guys that love football, that will hold each other accountable, that will be good teammates. It stuck out like a beacon light. Look at the teams that win in this league. It’s culture. Culture wins. It absolutely wins. Football is the greatest team sport. It really is because guys want to have individual success, but they can’t have individual success without their teammates. They can’t do it. Not in this sport. It’s too hard.”

Ballard has been reading a book on the Chicago Cubs, and is fascinated with the way Theo Epstein assembled the team and how Joe Maddon leads it.  And for very good reason – the Cubs won their first World Series in 108 years last November.

The Colts are going to be built toward a culture, and it is cultures that win championships.

Yesterday, Ballard said all the right things.  Beginning a week from tonight, we’ll see if he can draft the right players.  If he does, get ready for a new era of excellence.