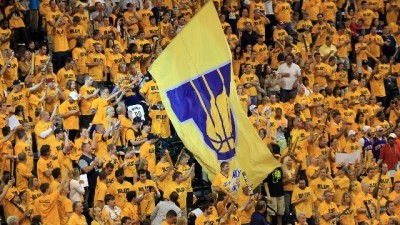 Pacers fans are going to be okay no matter what Paul George decides, but going to LA might be a huge mistake.

Paul George has a decision to make.  Stay in Indianapolis to continue to earn sick cash with the Pacers or bounce to Los Angeles, Miami, or another NBA outpost for slightly less.

The Pacers have an opportunity to benefit regardless of what George believes is best.

If George wants out, adios muchacho!  Don’t let the door hit you on the ass.  If George wants to stay to become the next Reggie Miller who spends his entire career in Indy, glad to have you.  Hoosiers like those who enjoy our unique hospitality.

And make no mistake – Indy has advantages over a lot of cities – Los Angeles in particular.  People from California tend to look at Indy as though it’s a replicant of every midwestern city.  I can assure you, that is not the case.  I’ve lived in four midwestern cities, and this is the friendliest and most accommodating place in America.

I’m agnostic about George staying or going.  He can do what he likes.  The Pacers will either retool or rebuild, and GM Kevin Pritchard can make either work.  The point is that I’m not trying to talk George into staying.  I just want him to see Indy for what it is – a great city to be drafted into, and a poor one to leave.

Here are eight reasons to prefer Indianapolis to Los Angeles – and I’ll stay away from traffic and smog because you already know those suck in LA – and don’t exist in Indianapolis.

8 – Natural disasters aplenty in Cali – Earthquakes may lay waste to the entire area one grim day, and if the big one doesn’t get Los Angelenos, a fire might.  Lucky enough to dodge the big one AND fires, mudslides might turn your home into a giant sled.  In Indy, a double wide trailer is destroyed by a tornado once or twice a summer, but I doubt George spends much time in a double wide.

7 – Pacers win 25 more games per season – The Lakers have won 91 games over the last four seasons.  The Pacers have won exactly 100 more games during that time.  While Kobe Bryant’s contract was a significant deterrent to winning through 2016, there is no reason to believe that championship contention is within the grasp of the Lakers, who last time I checked were a significant distance behind the Golden State Warriors, San Antonio Spurs, and Houston Rockets in the race for dominance in the Western Conference..

6 – Palmdale is to LA as Ft. Wayne is to Indianapolis.  LA might be closer to George’s hometown of Palmdale than Indianapolis, but it’s not Malibu, Brentwood, or Beverly Hills.  Obviously, George isn’t going to live in Palmdale, but the “coming home” narrative is way overblown.

5 – Indy is not fascinated by celebrities – Fame doesn’t suck in Indianapolis the way it does in LA.  The anonymous crave notoriety, but the famous crave anonymity.  In Indy, the famous can live a normal life because we don’t gawk, pester, or demand autographs.  At the peak of his fame, I saw Peyton Manning eat completely unbothered in a crowded McAllister’s at 96th and Meridian.  That’s Peyton Manning.  Paul George is not Peyton Manning.

4 – Clubs – No, I’m not suggesting the clubs in Indy trump those in LA or South Beach, but I am suggesting that George will have the means to build his own club, and host whomever he likes in it.  Why pay $500 for bottle service when you can charge $500 to others?  Or just giveaway drinks bartered through a sponsorship deal.  Who wants to hang with a bunch of sycophant strangers when you can party with sycophant friends?

3 – Leaving the Pacers hasn’t benefitted many – I’ve tried to find an NBA player who thrived after leaving the nurturing cocoon provided by the Pacers.  Lance Stephenson?  Nope.  Roy Hibbert?  Not quite.  Jamal Tinsley? Ruh-ruh.  Jermaine O’Neil? With the Pacers, he played like a hall of famer.  After he was traded, he played like Jermaine Jackson.  David West?  He was aging when he left, but still a no.  There are plenty of other examples, and I’m not sure why players tend to do their best work here, but they do.  Pacers leave Indy at their own risk.

2 – State income taxes in California – People assume that because George is from Palmdale, California, (just two hours away from center court of the Staples Center) he will choose to roll to the Lakers as a free agent.  What his accountant will tell him is that state income tax in California is $13.3% compared to 3.3% in Indiana.  For those of you without a calculator, the difference is exactly 10%, which means George will forfeit an additional $3,000,000 if he signs for $30M per.  There is some bad news here for Pacers fans too – Florida (home to the Orlando Magic and Miami Heat) and Texas (home of the San Antonio Spurs, Houston Rockets, and Dallas Mavericks) have no state income tax at all.

1 – Mo’ money, mo’ problems – While George can make more money with the Pacers, it’s a whole hell of a lot harder in Indianapolis to find the problems it can bring.  While we have had the occasional financial predator, like Marcus Schrenker, they tend to be of the not-too-clever variety, and that allows problems to be mitigated without major loss of assets.  The real estate market is far more reasonable as well.  If there is another crash, it’s better to fall in a two-million-dollar home than one costing 10 times that amount.