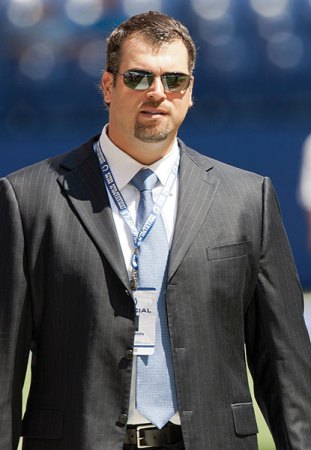 Ryan Grigson might not have been a great GM, but he shouldn’t be a punchline.

I get it.  Former Colts general manager Ryan Grigson was hired by the Cleveland Browns, and isn’t that funny.

Grigson’s reign as the head of the Colts ended after the 2016 season when it became clear to owner Jim Irsay that Grisgon’s drafts from 2013-2016 eroded the quality of the defense to the point where that unit made it impossible for the Colts to compete successfully in the woeful AFC South.

He will be forever remembered in Indy for pulling the trigger on a trade that virtually everyone in the city was on board with at the time – a first round pick in the 2014 draft went to the Browns for running back Trent Richardson, who was the third overall pick in the 2012 draft.

That trade was a disaster for both teams.  The Colts said adios to Trent after the following season, and the Browns traded the Colts pick to move up and take Johnny Manziel.  This trade will stand the test of time the best-ever example of a lose-lose deal in sports history.

Because the trade involved the Browns, the Grigson hire is especially funny to some.  “This is a perfect marriage of terrible franchise and terrible executive,” many are saying on Twitter.

Let’s not forget these some serious positives about Grigson’s time running the show in Indy.

Maybe I’m a little soft because I have run things, made decisions affecting jobs and lives, and understand the withering responsibility management requires.

Laughing at the expense of a guy who did nothing but his best is a little beyond the level of cruelty I’m willing to express – even when it is funny.

No, Grigson was not a great builder of the Colts franchise, and he may have responded to adversity with the Colts with arrogance and unpleasantness, but treating him as a punch line as he accepts a position with the NFL’s worst franchise is an inaccurate and miserable characterization of his term here – and reveals many as human beings on par with Grigson as a GM.