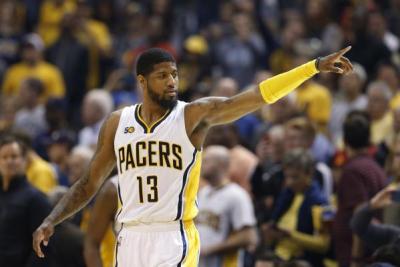 Reports of George’s desire to leave the Pacers for the Los Angeles Lakers when he becomes a free agent next summer have been confirmed, and as a result Pacers fans are ready to usher him out the door sooner rather than later.

George has always had a tone deafness to his play and media comments, but allowing the communication between his camp and Pacers GM Kevin Pritchard that he plans to sign with the Lakers represents a new low for the all-star.

The big question is no longer whether George will move from Indianapolis.  It’s now whether George’s value is greatest right now, or immediately prior to the NBA trade deadline in February?  What if anything can the Pacers get for an 82 game (plus the playoffs) rental of Paul George?

It has long been assumed George would prefer playing in Los Angeles – an hour from his hometown of Palmdale, but no one thought he would eviscerate his trade value by declaring his intention to bolt for a specific team.

Now the Pacers are in the unenviable position of needing to trade George or expose him to 41-games of relentless negativity from the normally positive fans at Bankers Life Fieldhouse.

The sad truth for George is the Pacers will likely to better off for his absence.  His zero game winning shots in seven seasons, lack of desire to go full tilt on a regular basis, and constant whining about the lack of team leadership was beginning to wear on even those deluded Pacers fans who thought a championship contender could be built around George.

If there was ever any doubt that George was completely tone deaf, it vanished Thursday night at the feel good event of the summer – the Caroline Symmes Celebrity Softball Challenge.  George has generously attended the game for years, helping to raise money for the Indiana Children’s Wish Fund through those efforts, but his quote that night about continuing to play for the Pacers was idiotic.

“I am a Pacer. I am under contract and I intend to play,” George blathered.  Intend to play?  As though he has any choice.  What’s the alternative – refusing to play?  Who’s he think he is, Ron Artest?

So George will move elsewhere, and his legacy will become the diminished return the Pacers score in return for the one-year of his services.

I guess that beats retiring without a championship as a lifetime Pacer, which would have certainly been the reality as it was (and is) inconceivable a team could win a championship with George as the centerpiece of the roster.

In astrological terms, George is a planet, not the sun.

To George, the Pacers are simply one of those teams from which players bolt to expand their brand awareness and value.

George is not the latest Kevin Durant, who left Oklahoma City to join a super team destined to cruise to a championship.  He views himself as a brand and nothing more.  This isn’t about titles –  it’s a marketing play, pure and simple.

As for Pacers fans, they will say goodbye to the team’s best known player who hits game winning shots only as the punchline to a preposterous Gatorade commercial.

Trust me when I tell you this is for the best.

2 thoughts on “Paul George proves himself as tone-deaf as he’s been inaccurate during crunch time.”