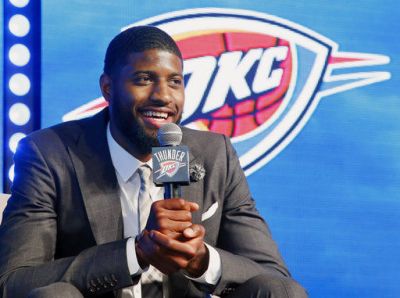 Paul George all smiles in OKC – for now.

Better to remain silent and be thought a fool than to speak and to remove all doubt.
— ABRAHAM LINCOLN.

Paul George must have been napping in the back of the classroom when funny things Lincoln might have said were discussed.

Every time George speaks, he conveys what is best kept hidden.  Over the last 48 hours, we have been privy the the inner-workings of the head and heart of the four-time all-star, and it hasn’t been pretty.

Here are the six most telling egregious quotes of the past two days and what they really mean – although they don’t really requires translation:

The opportunity to compete exists every day in every situation.  Michael Jordan had a “love of the game” clause in his contracts that allowed him to compete at basketball anywhere and anytime he pleased.  Paul George feels he has a better chance to compete in OKC than he did in Indy.  Competition exists within our hearts and character – not in a city or as part of a specific roster.

5 – “There’s no right way to handle it.  I get the frustration. I get why people are upset. But at the same time, I want the average fan to understand that we only get a small window to play this game and more than anything you want to be able to play for a championship. I wanted to bring that to Indiana. I really did. I love Indiana. That will always be a special place for me and I’m sorry for not holding on. But I wasn’t sure we’d ever get a team together to compete for a championship and that’s where all this came from.”

George doesn’t understand that Pacers fans are fine with him leaving.  The frustration came from the return in the trade being potentially affected by George’s agent leaking that he plans to sign with the Lakers.  The Pacers were never going to be a championship team with George as its best player, and they had limited avenues to acquiring a batman to lead George’s Robin.  Fans understand the Pacers are better off in the long run minus George.

The window was closed and sealed because George was sitting on it.  His inability to compete consistently as he positioned himself as a brand who could leave Indy and max out his future earnings elsewhere was obvious and odious.

3 – “Being a knock-down shooter, I think I can spread the floor for him.”

Only an ass refers to himself as a “knock-down shooter”.  I hope George enjoys being the second option for a ball dominant (to say the least) point guard.

2 – “People saying I want to come here (Los Angeles), who doesn’t want to play for their hometown? That’s a dream come true, if you’re a kid growing up on the outskirts of L.A., to be the man in your city. But it’s definitely been overstated.”

What’s overstated?  That playing in LA a dream come true, which is what George admitted in the previous sentence?  If Paul George is ever “the man” in LA, the Lakers will be fortunate to win more than they lose.

1 – “I’m playing this game to win and build a legacy of winning. I’ve yet to do that. I’m searching for it.”

Legacies are the result of consistent performance, not sought after like a nice watch.  Legacies of greatness require a level of sacrifice and embraced discomfort that elevate the level of play from possession to possession.  Championships can be the result, but it’s the investment in process that must come first.  The place to seek that is within each of us – not on a roster or in another city.

Greatness is in the DNA of those who are great, not the result of changing uniforms.

Good luck to Paul George, who is a very nice guy who views himself in the reflection of a very kind and gentle mirror.

6 thoughts on “With every word, former Pacers forward Paul George shows why fans should be happy he’s gone.”