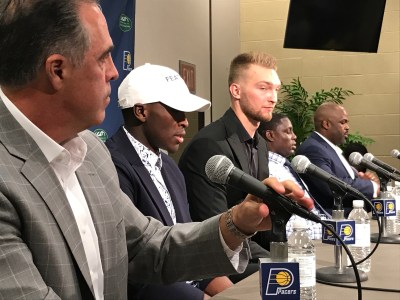 Kevin Pritchard introduces three of the many new Pacers to coach Nate McMillan and the media.

Replacing them are players both familiar and not so much like Victor Oladipo, Bojan Bodganovich, Darren Collison, T.J. Leaf, Domas Sabonis, Cory Joseph,, and others.

When Kevin Pritchard replaced Larry Bird in April as the president of basketball operations, fans and media thought, “Meet the new boss, same as the old boss.”

As soon as George informed the Pacers that he could not be paid enough money to be compelled to remain in Indianapolis after next season when he will become a free agent, the Pacers aggressively became younger and faster.

They will hopefully compete at a higher level as well.  Fans in Indiana want fundamentally sound basketball played with grit, and for all of George’s vast physical tools, he never displayed a version of himself that could be described as “gritty”.

George’s chief focus has always been to brand himself effectively, and there is nothing wrong with that.  Being a successful businessman will bring George and his family great wealth throughout the rest of his career, but his self-immersion renders him incapable of winning a championship as the best player on his team.

That the Pacers will be less talented in 2017-2018 is a given.  No current players on the roster have ever played in an all-star game.  But that doesn’t mean they won’t be fun to watch once we figure out who they are and what drew Pritchard to acquire them.

Pritchard’s Pacers are undefeated right now, and so fans are willing to embrace the new direction designed around the development of young players who have not yet reached their prime.

Maybe the Pacers win 35 games next season.  That’s alright because no matter who plays for the Pacers for the next couple of years at least, NBA championships will be won by either the Golden State Warriors or the team for whom LeBron James plays.

Pritchard’s focus is on 2020-2021 because that is the first season a window might open for someone else to hang a banner.

Until then, let’s embrace these guys win or lose – as long as they fight like hell and get in a defensive stance rather than wander around the floor lost and disinterested.

4 thoughts on “Indiana Pacers fans will wonder just who the hell they are watching, and then love them”