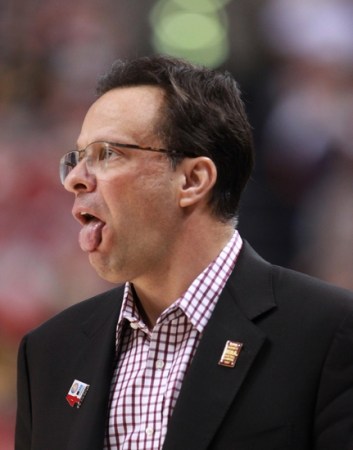 This is the face Tom Crean should use to tell Louisville “No!” should they facetime him to offer him the job.

Helping people is what I enjoy best, and today my efforts are to help former Indiana basketball coach Tom Crean compile his list of reasons not to pick up the phone if the University of Louisville calls.

I also want Louisville fans to wrap their arms around a few facts as they build expectations as to who might be the program’s fifth coach since World War II..

Before we begin our little adventure in explaining why Crean would never take the job, it’s important to understand the difference between interim and permanent.  If at the end of this season Tom Crean is offered the permanent Louisville job, he might crawl over broken glass to accept it or he might not.  It will depend upon how the NCAA sanctions shake out, and who is hired into the president and athletic director positions.

Louisville is a college basketball blue blood, and there is plenty of good down there.  Unfortunately, none of the positive attributes outweigh the current day negatives as a shrewd and detail-oriented coach like Crean evaluates his next move.

Here is a quick look at five reasons Tom Crean should not to accept the position as interim men’s basketball coach at the University of Louisville:

3 – He’s already being paid ay Indiana.  Why grab a mop to clean up this mess when IU is still cutting you checks for combing the beach with a metal detector, or whatever else Crean might be doing to fill his days?  Crean wants to coach again, but he needs to be very careful about his next step.  Mopping does not need to be a part of his responsibilities, so why welcome it?

2 – No idea to whom you will answer.  Never take a job without a clear idea of who your boss will be.  That’s one of the great rules of evaluating a job offer.  I was once interviewed by phone by three different executives of a media company.  I asked each, “Who will I report to?”  Each answered, “Me!”  Adios, muchachos!  Until the permanent university president and athletic director are named, this job is toxic.  The chances of the interim coach becoming permanent are minuscule when two different people will make that call.

1 – The NCAA may lower the boom.  I cannot fathom the NCAA assessing the death penalty to a basketball program like Louisville, but the sanctions will be severe for the second major violation in a very short period of time.  The penalties will like be debilitating for a significant period of time.  While this is also a great reason for avoiding the permanent job, it’s no less crucial now as players are likely to run from the campus like it’s burning as the NCAA flexes its muscles with scholarship limits, postseason bans, and recruiting restrictions.

Usually, these lists are five or 10 items long.  No need for more than three here.