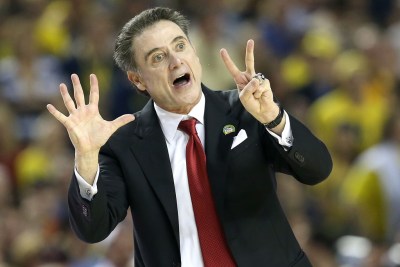 This is how many million bucks you can make every year by taking advantage of a ridiculously naive system.

I get pissed off at cheaters, so I tend to ignore them.  Changing them is too hard.

College basketball is filled with different degrees of cheaters, and Rick Pitino was neither the best nor the worst of them.  He’s just the guy who most recently got caught.

We are now supposed to rage against the depravity of coaches who work with shoe companies to funnel cash to the families of athletes.  I get it.  I’m mad too.

Cheaters get the material things that many covet but can’t afford, while those who operate in the best interest of the student-athletes within the rules get fired because they can’t compete with the cheaters.

This isn’t unique to college hoops – or even college athletics.  Wall Street is filled with similarly motivated thieves, who pay for their estates on Long Island with money filched one way or another from the retirement funds of trusting middle class dupes.

The banking system is never going to change because the rewards for bad actors are immense while the consequences are virtually nonexistent, and the same is true for college basketball.  Coaches are paid millions to lead young men onto the basketball court to compete against similar groups of students.

Media companies invest billions to showcase the events, and shoe companies pay hundreds of millions for the students to display their wares.

The kids earn the opportunity to learn at some of the world’s great institutions of higher learning, and everyone else gets paid tall stacks of cash.  The general funds of the schools blossom as boosters write big checks to qualify to buy season tickets at court level.

Unlike the banking industry, there are no losers because of the villainy inside college basketball.

Oh, we can lament the lot of the programs without the exposure and resulting cash needed to compete with the cheaters, but everyone at the big splashy programs get paid, boosters are thrilled to write checks, and the majority of the kids not headed for the NBA believe that they are.

That long dreamed of payday will never come for the vast majority of athletes, but they will have an education, right?  If they weren’t hustled by family members, friends, advisors, or whomever else they mistakenly allowed to rewire their attitudes toward their inevitable 10-years career in the NBA, they do.  But that’s a complaint for a different post.

Sadly, the entire college basketball operation was built by do-gooder knuckleheads who want college athletics to remain a pure and naive paean that harmonizes with our most innocent belief system.  That innocent framework has denied the reality that material desires drive many, and that winning is the key to unlock riches.

That allows an opening for the nefarious to exploit the system as Pitino and others do, and also prompts those most outraged to refuse to alter the system to stop the wicked because it would corrupt the potential beauty of college basketball done right.

Every blue moon, a Pitino is fed to the do-gooders because we need to hold somebody accountable for the corruption that has always been so pervasive.  Consequences for Pitino and those like him release the steam inside those who want to believe that good will eventually win.

That’s nonsense, of course.  The system will never change because goodness isn’t an ideal lofty enough to make change worth our time and effort.

Occasional rage and remote consequence will have to do as greed continues to win in college basketball.