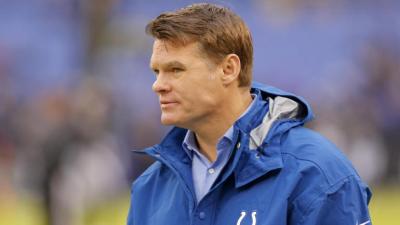 It’s going to be a while before we can evaluate Chris Ballard’s work as a GM.

When Chris Ballard took over as general manager of the Indianapolis Colts, he said the roster would be rebuilt through the draft.  He wasn’t kidding.

It’s tough to go from where the Colts were to becoming a Super Bowl champion.  When the Colts were rolling in the 2000s, they had four players on the offensive side of the ball who will likely wind up in the Pro Football Hall of Fame.  They won a single Super Bowl.

As we cast our eyes about the practice field during training camp, it was difficult to foresee any of the guys currently on the roster enshrined.  Maybe Andrew Luck?  On the defense, it was hard to see a definitive starter.

Through two drafts, Ballard has targeted two sure things (if healthy) in the first round.  As a rookie. safety Malik Hooker appeared to be exactly the ball-hawking safety he projected to be before tearing his ACL.  Left guard Quentin Nelson has yet to play a regular season game, but looks like a can’t miss starter for as long as he stays healthy.

But if you are going to build with first round picks, and they play for a decade – you are going to need 12 starters from someplace else.  That means hitting on picks in later rounds.  So early in the Ballard era, it’s impossible to say which of his selections outside the first round are busts, other than Zach Banner – cut last season after being taken in the fourth round of the 2017 draft.

According to Pro Football Focus, 53% of all draft picks add no value to the team that drafted them.  Let’s round that to 50% to simplify things – and give Ballard a 3% bump for being a smart guy.  If the Colts average seven draftees per year, which makes sense given the seven rounds of the NFL Draft, they will add quality 35 players each decade.  That leaves 18 roster spots to fill, assuming all functional draftees stay healthy (which is preposterous) after 10 drafts.

I’m assuming Ballard knows all this stuff, and understands that he will eventually have to dip into owner Jim Irsay’s wallet to sign talented free agents to multi-year deals, rather than sticking primarily to role players who require only a one-year contract.

Free agency alone doesn’t work, but the draft by itself clearly can’t supply enough quality players to stock a championship team.  It takes a combination of great evaluation and execution in the draft, and the occasional home run with a cast off from someone else’s roster to get there.

Luck (both good fortune AND Andrew) is a huge component too.

There are a couple of things we know about Ballard after a year and a half in the big chair – he’s very honest, and he’s very confident.  One tends to lead to the other.  I have archived every response he has offered in media availabilities, reviewed every answer, and to my knowledge he has yet to lie.  He’s occasionally clever with language, but he’s not lied.

Ballard also doesn’t tip his hand, which is wise, so we are left to ponder at what point he’ll shove his chips into the middle of the table to try to bump the roster to the next level.

Fans are left with questions about the pace of this rebuild.  It seems to be exceptionally deliberate, and as with the Chicago Cubs when Theo Epstein took over impatience from fans is going to be an issue.

No one affiliated with an NFL franchise is going to say out loud that 2020 is the target for being competitive.  Tickets in 2018 still need to be sold, and hope two year down the road is not going to send people to Colts.com today to order season tickets.

But it sure looks like Ballard has his eyes downfield a few years, and we are left to trust that he knows what the hell he’s doing.  Unlike Bill Polian, he’s never held this position before.

Being optimistic about the Colts’ future is going to require a lot of trust.  Ballard needs to be as good at his job as he believes he is for our trust to be validated.