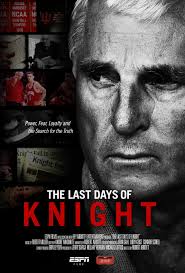 Will we ever stop being fascinated by Bob Knight? I hope so.

Last night, I watched “The Last Days of Knight” – an ESPN 30 for 30 documentary about the CNN/SI work that led to his firing at IU – and I felt dirty.

As with any basketball fan who studied at Indiana University in Bloomington during the Knight era, I’ve given a lot of thought to Knight’s style of leadership and its effect – both positive and negative – on those who played for him.

Somewhere along the way, I stopped.

I stopped because it’s not mine to judge.  The experience of playing for Knight belongs to those who lived through it, learned from it, and deal with it.

It’s their story to tell, not mine to interpret.  So I leave it alone.

“The Last Days of Knight” is really the story of a journalist extracting a version of a former player’s truth, and in doing so causing the former player great emotional pain.

It can be argued that reporter/filmmaker Robert Abbott’s work in tearing apart Neil Reed’s emotional scar tissue did as much harm to him as Knight during Reed’s three years in Bloomington.

Some who played for Knight see him as brilliant.  Others found his leadership abusive.  There are National Championship banners hanging in Simon Skjodt Assembly Hall won by players led by Knight.  And more importantly there are the players he taught the game who are now adults living with the memories and lessons learned in the effort to perfect their execution and understanding of basketball.

They are the legacy.  Each tells a vivid, compelling, and unique story from their time playing for Knight.  I’ve tried to take the stories and create a composite of Knight that might explain him.  It’s impossible, and at some point I stopped trying because it led me to ask questions of former players I know – questions with answers that are none of my business.

It’s time to leave Bob Knight be – and it’s time to leave his former players alone.  Let them view their time with Knight as a small sliver of who they are – not the only part you care about.

Experiences with Bob Knight do not define those who played for him, nor do those players define Knight.