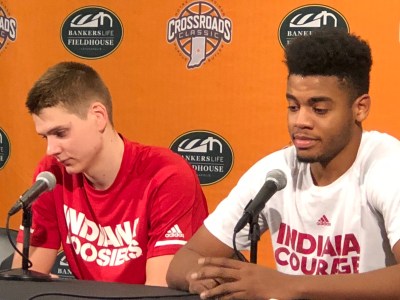 Indiana Basketball is not what it once was, and hopefully Zach McRoberts and Juwan Morgan are seen as players who helped turn the culture around.

Indiana’s Basketball team has lost seven straight games, and people are wondering why a promising season has spun wildly out of control.

Injuries, scheduling, effort, coaching, and toughness are among the many guesses being proffered by fans and media.  All are correct to one extent or another, but Indiana Basketball has been a consistently mediocre program with occasional departures in positive and negative directions since 1994.

I’m not certain Miller is the right guy to rebuild Indiana into a consistent winner (I feel much better about him than any of the previous three), but he was doubtless not a party to IU’s precipitous decline over the last quarter century.

Here are the people and circumstances that landed Indiana Basketball in the rubble fighting for relevance:

5 – Bob Knight never should have allowed Dan Dakich to leave Bloomington.  Dan was the obvious heir apparent to Knight during the latter portion of his decade as a Knight assistant.  The Knight culture was clearly successful, and Dan was the standard bearer.  A secure leader will always have his successor in place, and Dan was that guy.  Knight tried to make himself indispensable by surrounding himself with men incapable of succeeding after his departure.

His staff in 1999-2000 included his son Pat, but only a lunatic would put his kid in a spot to follow a legend in that same role.  Knight proved himself to be exactly that kind of lunatic when he walked away at Texas Tech and bequeathed the program to Pat.

4 – AD Clarence Doninger should have had a plan to replace Knight in place when zero-tolerance was enacted.  Only fools thought Knight would ultimately survive IU president Myles Brand’s zero-tolerance edict, and as the AD, Doninger was responsible for finding the next coach during the period the inclubant survived.  The most important responsibility of an AD is hiring the coaches of the two revenue generators of the department.  Doninger left himself without an option when Knight was fired.  It was either promote Mike Davis or lose the roster.

3 – AD Rick Greenspan should have been fired with Kelvin Sampson.  Why allow the boob who didn’t know better than to hire Sampson to replace him?  This made no sense at all.  While Sampson was the head coach at Oklahoma, the NCAA issued a report citing more than 550 impermissible calls made by Sampson and his staff to 17 different recruits.  Inviting Sampson into Assembly Hall was an act of sheer stupidity that should have immediately cost Greenspan his job when he repeated his crimes in Bloomington.

2 – Mike Davis should have been replaced after his interim year.  Davis led IU to the National Championship game in his second year running the show, so arguing for his dismissal prior to that season borders on the silly, but he was not ready for the job – even by his own admission.  An AD needs to understand hiring in order to succeed, and hiring requires a grasp of fit.  The decision to extend Davis was based upon prudence, not fit.

Now Davis wasn’t going to fire himself, so why is he held responsible?  Because, according to the story I heard from someone who was there, Davis refused to recruit Mike Conley, Jr.  Everyone knew that Conley and Greg Oden were a package deal, and Davis only gave meaningful attention to Oden.  In fact, Davis enclosed a letter to another recruit and addressed the envelope to Conley.  Yikes!  Recruiting five-star recruits in Indiana requires not insulting them.

1 – Not Tom Crean.  I hold Crean accountable for IU’s woes not one little bit.  It’s true that Tom was a poor fit, but Tom didn’t hire himself.  All Tom did was the best job he could every single minute of every single day he was on the job.  That should be applauded, not derided as we assess culpability for Indiana no longer being Indiana in the world of college hoops.