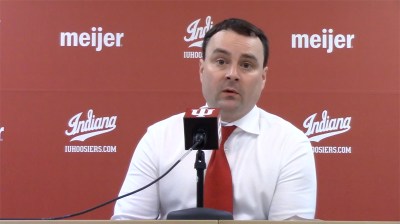 In a stunning development, the hopes of the Indiana Hoosiers to earn a bid to the NCAA Tournament are not only alive, but thriving.

The window that was open just a crack now appears to be open enough to offer hope that the Hoosiers control their own destiny with two final regular season tests.

After losing 12 of 13, IU righted the ship with two home wins against ranked opponents.  Today’s 63-62 nail-biter against Michigan State put the Hoosiers back on the bubble despite 12 Big 10 losses.

You can argue that IU is not good enough to be competitive in the Big Dance, but all doubt is gone they are good enough to win a game or two in it.  That potential for excellence elevates them over a bunch of other bubble teams.

Indiana has six quadrant one wins, and that is a damn good number in a category that’s very meaningful for the selection committee.

It’s debatable whether Indiana winning seven games that were separated by nine points at the end of regulation is good or bad, but no sane coach or player argues with winning.

There is no doubt IU is playing its best basketball of the season.  Today’s win against the Spartans was the fourth straight game that saw nearly maximum effort from everyone for 40 minutes.

The horrific 84-63 loss at Minnesota was the turning point.  Indiana was flat throughout, and that is being kind.  Archie Miller used other terms that challenged players’ pride.

Now it’s up to IU to follow back-to-back quality wins by finishing the regular season with two more wins at Illinois and against Rutgers.  Get that done, and follow it with a rare win at the Big 10 Tournament, and they will dare the committee to not punch their ticket.

There are two ways to look at this season for Indiana – the cup half full view is to focus on how a team that played so poorly to lose at Rutgers and Northwestern could also sweep a top five team like Michigan State.  Cup half empty would be how could a team good enough to sweep Michigan State, and beat Wisconsin, Louisville, and Marquette get their asses smoked by Minnesota, Rutgers, and Northwestern?

Better to see IU’s season as both half full and half empty.  That would be appropriate for a 15-14 team that is capable of good and bad in equal measure.

The good news is that if IU finds a way to sweep the next two games, the NIT should be a no-brainer regardless of the Big 10 Tournament.

A bid to the NIT would be step in the right direction for a program that hasn’t enjoyed any madness in March since 2016 when IU went to the Sweet 16 as a five-seed.

There are some significant questions to ask about the trajectory of the Indiana program, but for now the only relevant concern is what kind of effort will they bring Thursday night in Champaign against the Fighting Illini.

6 thoughts on ““Archie, we have a pulse!” Stunning win against Sparty serves as a defibrillator for Hoosiers NCAA Tourney hopes”