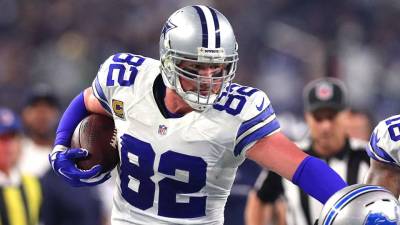 Jason Witten is returning to what he does best.

Jason Witten is coming back to the Dallas Cowboys.

Good news for the Cowboys, the NFL, for ESPN, and football fans who watch Monday Night Football..

As dynamic a Cowboys tight end as Witten was for 15 seasons, he was just that bland as a well-paid analyst on MNF.

People is Bristol knew it, wanted a chance to turn back the clock, undo the hire, and take another hard run at Peyton Manning.  With this decision by Witten, they get their chance.

Witten was adamant about who made the call in the statement announcing his return to the Cowboys, “This was completely my decision, and I am very comfortable with it.”  Well, okay then.

What he’s trying to communicate in very strong language is that ESPN didn’t fire him.  I wouldn’t have thought they did if Witten hadn’t been so heavy handed about it.

When people strongly deny what hasn’t been accused, it smells like the preempted accusation might be warranted.

Getting fired by a media company like ESPN should not be a source of shame.  The blame for Witten’s blandness isn’t Witten’s – it belongs to the guy who assessed him as a potentially compelling voice in a booth that has had great voices like Cosell, Meredith, Gruden, Madden, and others like Dennis Miller, Tony Kornhiser, Alex Karras, and O.J. Simpson.

As a player known for being an offensive weapon, Witten was unwise to take such a defensive stance as he announced his return to the Cowboys.

Who’s next in the booth?  It will be Manning if ESPN can stomach the asking price.  He won’t come cheap.

2 thoughts on “In returning to the Cowboys, Jason Witten didn’t need to make sooo clear exiting ESPN was his idea”