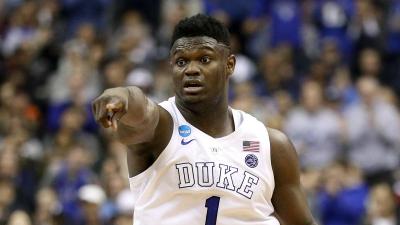 Zion Williamson made a lot of money for CBS, ESPN, Nike, and Duke. For that, he received the privilege of a free year of education at Duke. That is absurd.

The NCAA announced yesterday it is forming a working group to discuss how college athletes might be able to control and monetize their likeness.

I can save them some time and effort.  Just say yes.  The answer is self-evident in the utterly corrupt and morally bankrupt answer to the question at the center of the debate:  Why has the NCAA prohibited football and men’s basketball players from profiting from their likeness?

Because it means more money for the schools.  It’s a matter of greed.

Greed is at the center of all debates regarding athletes earning money – either from their likeness or as university employees.  Money for players comes from a fixed pool of resources that are currently allocated to coaches, administrators, and other departments.  More resources for athletes = less resources for everyone else.

The argument against allowing athletes to monetize images and likenesses is slightly more nuanced than straight up basic math because it would allow boosters the opportunity to pay athletes on top of the table rather than under it.  More boosters would equate to a greater opportunity to earn, and as a result the chasm between huge programs and those at small universities would grow.

There would also be a potential for rifts between players on the same roster.  Big name guys would get paid while those at the end of the bench would struggle.  A class system would develop, and that’s yet another pain in the ass for coaches to manage.

Plenty of reasons exist for not changing the system, and only one in favor of allowing the market to prevail – because it is fair.

Americans have a equal opportunity to create wealth – or at least there is not a legal prohibition against it – except in college football and men’s basketball.

Allowing student-athletes to monetize their brands is reasonable even if some of the consequences of that policy change will cause chaos within the collegiate athletics business model.

The answer to almost all of life’s questions can be found somewhere in The Godfather trilogy, and for the answer to whether student-athletes should be allowed to profit from their brand, I turn to Don Barzini who in a meeting of the heads of the five families in The Godfather famously said, ”

“He must let us draw the water from the well. Certainly he can – present a bill for such services. After all – we are not Communists.“

Replace “he” with “the NCAA”, and we arrive at the nut of the issue.

College athletes should not be immune to our capitalist economic principles just because they are athletes, and just because it benefits coaches and administrators.