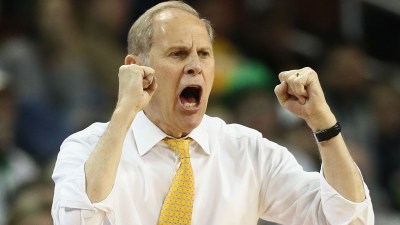 John Beilein’s results demand a seamless transition – not a re-plating of the Michigan Basketball culture.

Michigan Basketball is broken, and only Juwan Howard can fix it.

Forget the two trips to the NCAA National Championship Game, Big 10 Championships, and Big Ten Tournament titles.  John Beilein’s 12 seasons as the head coach at Michigan were clearly a disappointment.

The time has come to reclaim the brand value of the Fab Five – a group who came to Michigan to win championships, but left with none in two seasons.  Those Wolverines failed to win a Big Ten title, and two runs to the NCAA Finals were vacated because of rules violations.

By the way, the Fab Five last played in Ann Arbor more than a quarter century ago.  Today’s college players were years from being born when their long shorts (or short longs) dominated the game’s fashion in a way their play couldn’t on the floor.

ESPN’s Jay Williams and Jalen Rose spent a good deal of time on ESPN this morning talking about how Juwan Howard is the only legitimate choice to bring greatness back to Ann Arbor as the replacement for John Beilein.  I get it from Rose – a friend of Howard’s going back to summer basketball when both were in high school – but from Williams the arguments sound ridiculous.

Howard might be a wonderful coach.  He’s making his bones on the Miami Heat staff, and by all accounts he’s a great guy, but does that justify unraveling what Beilein built over the last 12 years?

If being an NBA player, alum, and great person were the qualities a coach needed to run a program – Chris Mullin, Sidney Lowe, Patrick Ewing, Clyde Drexler, and many others would be wearing championship rings.  They aren’t.  In fact, all of the above but Ewing were fired within five years.

For a program that achieved at a very high level while being clean under Beilein, Michigan appears to be on the precipice of solving a problem that doesn’t exist.

Rose needs to take a step back and allow the AD to make the right choice.  Let him go get someone who can build on what Beilein has already created without being pushed into a corner by logrolling for Howard.  Williams can just keep yammering about things he knows nothing about because only fools listen.

[Another example of Williams blather came this morning as he said “the NCAA should be put on probation.”  He was trying to be funny, but every time Williams blames the NCAA for college basketball’s woes, he reveals himself as ignorant to the sources of both causes and solutions for those problems.]

Beilein was hired by an AD who made the right choice instead of the popular one.  There is nothing sexy about Beilein, but the guy can coach.  Recruits weren’t awed by Beilein walking into their home, but were impressed by what he might help them achieve at Michigan.  Beilein has never set a fashion trend – or has a program placed on probation.  His two trips to the National Final weren’t vacated.

Michigan needs to repeat the process that brought Beilein to Ann Arbor.

Until Michigan does the right thing, let us marvel at the tweet of a guy who is paid a lot of money to share ridiculous and uninformed opinions:

Juwan Howard needs to be the next head coach at @umichbball … bring back the culture of that program. @espn