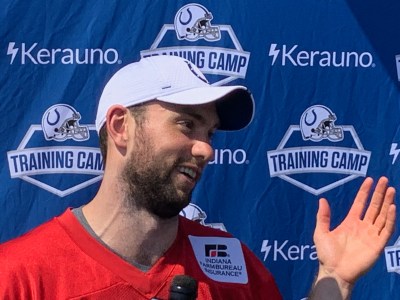 Andrew Luck might be smiling, but he is not a fan of sharing the truth with media.

Colts quarterback Andrew Luck loves football, but he is not a fan of the fame that comes with it.  That much is clear.

He’s never told us that, but it’s communicated in his weekly media availabilities as he effusively communicates very little.  Luck clearly believes that his health is a private matter, and he is not eager to share the details of his various diagnoses and treatments.

Coach Frank Reich defers to Luck when discussing health, but owner Jim Irsay says all kinds of things when quizzed about Luck being on the shelf.  Whether his comments are driven by a desire to open fans’ wallets or simply please them, who knows?  But he is always incredibly optimistic.

GM Chris Ballard probably came the closest to telling the truth yesterday in discussing a change in the diagnosis from Irsay’s claim of a bone problem to a condition with his high ankle.  Ballard released the tension by relating that Luck was not likely to play in the final three preseason games.  That bought Luck a couple of weeks to rehab in peace and quiet.

Fame can be a difficult companion for those who want to maintain a private life, but transparency is always best.  A craving for privacy brings the appearance of secrecy, and secrecy activates the media’s desire to investigate.  The truth satisfies the media, and ironically deflates the public curiosity that drives famous people crazy.

We are big fans of the truth, so here are 10 truths about the Colts and Luck’s ankle/calf: