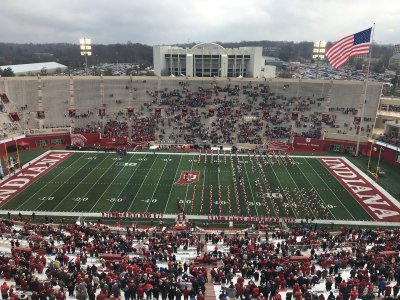 Granted, this is during halftime when thousands flock to their tailgates for a freshener, but the student section at last year’s Bucket Game – with a bowl invitation on the line – was nearly empty.

Because the Old Oaken Bucket Game between Indiana and Purdue is played on the Saturday following Thanksgiving, both IU and Purdue students are home for the long weekend rather than in Bloomington and West Lafayette.

That’s the argument for moving the Bucket Game from a rotating home and home series to Lucas Oil Stadium.  If students can’t attend, why host the game on an empty Indiana or Purdue campus?

Lucas Oil Stadium isn’t quite equidistant from both IU and Purdue, but it’s close enough (72.7 miles from Ross-Ade Stadium and 51.5 miles from Memorial Stadium) to be equally convenient for boosters, and serves as a closer spot for all the students of both universities who have homes in Indianapolis.

There are very likely more IU and Purdue students who are season ticket holders within 10 miles of Lucas Oil Stadium than on either campus on the last Saturday of college football’s regular season.

This wasn’t a problem until 2010 – the first year the Bucket Game was regularly scheduled for the Saturday after Thanksgiving.  Prior to that, it was usually played on the Saturday before Thanksgiving, when students needed a break from studying for pre-break tests.  It was a raucous party back then.  Now, the bleachers at Memorial Stadium are mostly untested by student posteriors.

There are complications to moving the game to Lucas Oil Stadium – like money.  It always comes down to cash, right?  Ross-Ade and Memorial Stadia are owned and operated by the universities they serve.  Lucas Oil Stadium is available for a steep price to those who wish to rent it.

Another complexity is Lucas Oil Stadium is already booked that weekend by the IHSAA for six state high school football championships.  That problem can be negotiated away, but the unpleasantness of displacing the high school championships would leave a lasting mark.

There isn’t a perfect answer, but one thing is for sure – it makes very little sense for the biggest rivalry game at both universities to be played on an empty campus.