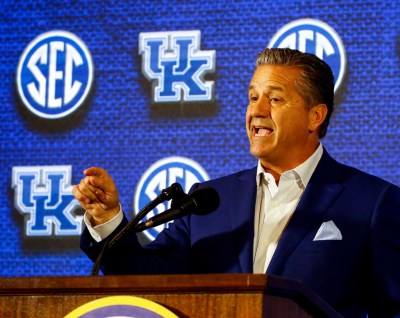 Calipari should get his facts straight about the effect of an expanded NBA Draft if he is going to talk about it.

As I scanned sports stories this morning, I dug into one because Kentucky Basketball coach John Calipari and I would finally agree on something.

Calipari came out against expanding the NBA Draft.  I assumed he believed it would be bad for college players because it would make sticking on an NBA roster more difficult than with the current two round format.

There is a benefit to not being drafted late in the second round because by being undrafted, players get to sign as a free agent with the employer of their choice.  They get to pick the situation that gives them what they believe is the best chance to make an NBA roster.

Here is what Calipari said about why he is against expanding the draft to a third round, “If anybody supports more rounds in the draft, those more rounds are to get kids to go to the G League, you do not care about college basketball or you’re trying to ruin college basketball.”  He continued, “After two years they don’t perform, what? The NBA is going to take care of them and hire them? No. It’s entertainment. You’re done.

“If they’re not going to the NBA, if we’re really about young people, we should encourage them to go to college.  And the reason is their way out is through education. Their way to break through to the American dream is education.”

There is a lot of wrong to unpack there.

Let’s start with the positive about Calipari’s argument (and I’m stretching to paint this as positive) – if he is talking about opening up the draft to four rounds while also allowing high school players to jump – high school kids going in the third or fourth round could be a tremendous mistake for those kids.  But it would still be better for those players to be free agents, and the likelihood of their jumping would be diminished by an expansion of the draft.

An expansion of the draft would actually discourage student-athletes or high school students from jumping, if they are getting good advice about the next step in their careers.  There was a reason the NBA reduced the draft to two rounds.  It caused teams and players more harm than good.

If they expand it, an athlete projected to be taken in the third round might be – should be – more likely to remain in college than those who fall just outside the second round are today.

That Calipari doesn’t understand that is odd.  I would assume he spends a lot of time thinking about this, and as one of the authority figures counted on by his players for con=unsel, he should have a better grasp of that situation.

As far as players taking advantage of the lift provided by an education, that still exists for anyone who jumps to pro basketball early.

Many schools, Kentucky among them, have adopted a policy that allows student athletes who leave early to pursue a professional opportunity to return to finish work toward a degree as though they are still on scholarship.

So what the hell is Calipari talking about when he champions education for athletes who opt to jump?

Calipari sees any change to the status quo as a threat to his $8,500,000 annual take from Kentucky.  I get that.  It’s selfish and myopic, but understandable.

But if he is going to try to portray himself as concerned for the student-athlete, he should understand the facts and represent them accurately.

Right or wrong, people listen to Calipari.  He has an obligation to be right once in a while.