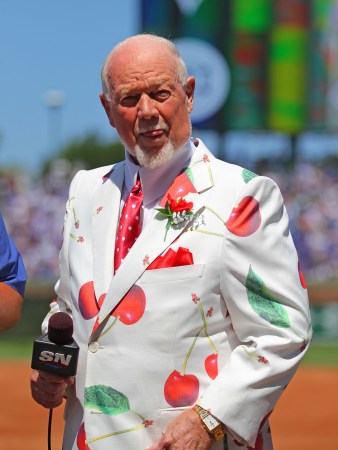 Don Cherry is the latest sports broadcaster to swerve away from talking about the game he covers into trouble – career-ending trouble.

That’s how it ended for Don Cherry, the guy who has worn outrageous suits on Canada Sportsnet’s “Hockey Night in Canada” for the past 40 years.

He veered from his lane, and like I-465 on weekends in Indianapolis, all lanes were then closed – in Cherry’s case permanently.

Poppies are a symbol of remembrance for casualties of war, but some see them as a divisive nationalistic symbol.  Evidently, Cherry’s use of the term “you people” referred to immigrants.

Cherry was fired as a result of his comments after thousands complained.  There will undoubtedly be a backlash from those who support Cherry’s position.  That’s the way these things work.

Social media arguments will ensue.  A lack of civility will quickly be established, and people who hide behind handles will call each other angry names.  That’s the difference between broadcasters and the social media rabble – broadcasters use their own name when they voice opinions.

When people disagree with a comment on TV or radio, they demand a severe consequence.  There is no accommodation for a disparate viewpoint – only shrill howling in the echo chamber of habituated disagreement.

This is a lesson to broadcasters – say what you believe about something other than sports at your own peril.

If an icon like Cherry is vulnerable, everyone is.

Stay in your lane, or those who dissent will tailgate and honk until you pull over and confront them.  Then they will take your keys and chase you into the woods until someone else who has the temerity to say something they oppose distracts them.