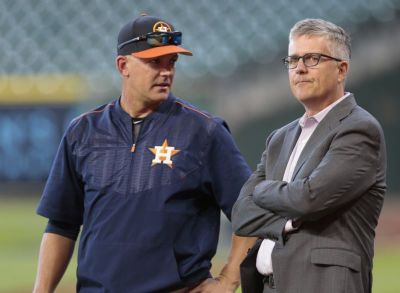 Cheating champions are still cheaters, and they need to be punished.

The Houston Astros have been accused of cheating by stealing signs electronically during their 2017 championship season by pitcher Mike Fiers and three others who were with the team, according to a post by Ken Rosenthal and Evan Drellich in The Athletic.

Stealing signs has been a part of baseball for time immemorial as players studied third base coaches and peered from second base in between catchers legs to figure out whether the next pitch would be a fastball, slider, or change.  But the use of electronics is as strictly forbidden as gambling or reproducing the broadcast of a game.

The Astros have long been suspected of various methods of skulduggery in trying to gain an advantage, but after winning two world championships in three years people are fed up.

The question is no longer whether the Astros cheated, it’s what will Major League Baseball do to stop the Astros or any other team that defies edicts as they try to wrangle an edge.

After all, the Astros aren’t the only team cheating.  According to Rosenthal and Drellich, the problem is pervasive.

Will MLB make an example of the Astros, or just flap its gums with a stern warning?  So far, all we know is the Astros have initiated an internal investigation into its own behavior.  Anyone with a semi-functional brain sees through that investigation as a feckless ruse to handpick the fall guy who will take the rap for the team.

There’s an old saying in sports, “If you ain’t cheating, you ain’t trying.”  (Sounds like someone in Kentucky said that first, doesn’t it?)  But does that idiotic phrase celebrating our boundless quest for glory excuse those who win championships because they cheat better than their opponents?

In 1920, Major League Baseball laid down the law when eight members of the Chicago White Sox were believed to have thrown the 1919 World Series against the Cincinnati Reds in exchange for the promise of payoffs from gamblers.  Those eight Sox players remain banned from baseball more than 100 years after their crime.

Charlie Comiskey’s White Sox were one of the most successful organizations in baseball prior to the Black Sox Scandal.  They have played in just two World Series since, and remain tainted by the worst chapter in baseball history.

The Astros shouldn’t be drawn and quartered like the White Sox, but Manfred needs to bring down the hammer, or he will grant license to every team willing to exhaust any and all means  to create an unfair advantage in their home ballpark.

I’m sure there are several teams cheating, just as I’m sure the Black Sox are not the only team to tank a series or game for their own financial benefit.  But the Astros are under the spotlight and whatever punitive measure that will be employed to discourage that behavior will likely fall square upon their heads.

And it should.  There comes a time when people in charge need to forget about expedience, profit, and fallout and do the right thing.  There is a school of thought in our society that a problem doesn’t exist as long as no one acknowledges it.  The cost of solving the problem is weighed against the savings created by ignoring it.  Lawyers call that prudence.

Baseball needs to stand up, shine a light on the way-too-smart-for-the-room Astros, and remind them that smart cheats are still cheats.