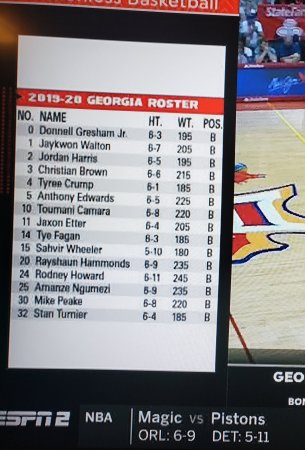 Every player on Georgia’s roster is listed as a “B.” I assume that stands for basketball player. (Photo by Aaron Torres)

Tom Crean is a curious individual.

And he is hard to write about.

I always feel cruel when I point out some of his foibles.  Crean wants so badly to be liked and respected that any effort to point to something that runs contrary to that narrative seems mean spirited.

During the beatdown Crean’s Georgia Bulldogs suffered today in the Maui Classic, ESPN put up the screenshot you see to the right.  All players are listed as being a B.  That, according to broadcasters, emphasizes Crean’s belief that basketball is becoming positionless.

Okay.  We get it.  Guards can post up and centers can handle.

As with so many widely held basketball axioms, Crean always tries to convince people he had the thought before anyone else.  Or at least that he’s more clever in advancing it.

Crean’s need to impress annoys people – at least it annoyed people when he coached at Indiana.  At Georgia, maybe fans are so transfixed by the football program’s effort to earn a berth in the College Football Playoff that they don’t notice.

The thing that bugs me about Crean is that he provokes me to mockery.  He reduces me to the 16-year-old prick who made people laugh by finding a peculiarity in others that would come to define them.

His quirks combined with a unique combination of arrogance and insecurity are irresistible.  Coaching today’s game, Crean wore a shortsleeved shirt.  I’ve never seen him where a shortsleeved shirt.  I always thought there must have been a vulgar tattoo on his forearm – or he had weird skinny arms or some other shameful reason for hiding them.  Nope.  Arms were totally normal.  I was both happy for Crean but disappointed to see that none of my bizarre assumptions were true.

That’s the dichotomy with Crean.  I want him to feel good about himself while celebrating reasons he doesn’t.

People think I dislike Crean and that I root against Georgia because of what I write and tweet about him.  In truth, I like Crean – kind of – but dislike myself for how I respond to him.  My instincts demand that I poke holes in his way-too-inflated ego.

There is the clapping, pacing, too-complicated offense, wacky “B” nonsense, tan, manipulative texts to media, inability to face AD Fred Glass when Fred asked for the meeting where he planned to fire Crean, his treatment of his first SID at Marquette, and another dozen idiosyncrasies or unpleasant behaviors that make him an easy target.

But why do I feel the need to mock?  It’s like fishing with dynamite.  It cheapens me, and makes Tom feel bad.  What’s the point?

I would like to see Georgia succeed with Tom as coach.  It might be the perfect place for him.  The Bulldogs have enough money to pay him what he demands, but the interest level is so low that fans may not pay enough attention to demand value.

One of these days, I’ll grow up a little bit and stop picking at this insufferable scab that just won’t go away.  Or maybe I won’t.  Maybe I’ll just embrace my inner jerk.

4 thoughts on “Tom Crean invents positionless basketball, and his Georgia Bulldogs get blasted by Dayton #iubb”