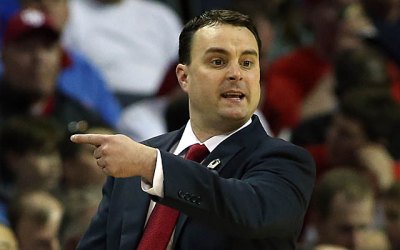 Archie points the way to the road his Hoosiers will need to take to get back to the NCAA Tournament.

If the Hoosiers get a win, all of a sudden they are 5-3 in conference play and halfway to the magic number of 10 wins with a gauntlet of tough games ahead at home and on the road.

As is always the case, players and coaches are focused on only the next game – or tonight’s game – so they resist the urge to glance down the schedule to see the following 12 games that will determine both the present and future of the program trying desperately to find its footing under Archie Miller.

You and I don’t need to be quite so laser-focused upon the now, so let’s indulge ourselves in the silly process of trying to cobble together another six wins before over a month before some of the games will be played.

Indiana beat Michigan State twice last season, outscoring the Spartans by a total of one point in regulation.  Can that run of good fortune continue tonight?  Looking back at last season’s wins, IU benefitted from almost unbelievable good luck in the OT win in East Lansing by hitting 10-20 from beyond the arc while Michigan State missed an astounding 14-22 from the line.  When IU won 63-62 at Assembly Hall, the Hoosiers hit nine 3s and committed only eight turnovers.  They also assisted on an average of 17.5 of their baskets in those games.

To paraphrase Myra Fleenor’s mom in Hoosiers, the sun don’t shine on the same dog’s ass every day, but IU’s ass was warmed greatly by that sun against Michigan State last season.  They will need some more good fortune to beat Sparty tonight.  I believe Indiana gets lucky tonight in a coin-flip game at raucous Assembly Hall.  Indiana wins to run its Big 10 record to 5-3.

Maryland is 1-4 this season on the road with its only win coming against lowly Northwestern.  The Terps are one of two teams in the Big 10 younger than Indiana, so the hope will be they continue to struggle away from College Park.  Despite Maryland’s #17 ranking and senior leader Anthony Cowan Jr. at PG, IU can win this game without getting lucky.  Indiana wins and is now 6-3!

Then Indiana goes on the road against Penn State and Ohio State.  I cannot in good conscience pick Indiana as a likely winner against either.  Ken Pom calculates the Hoosiers chance of winning these games at 31% and 24%.  Seems about right in a conference where road wins are tough to come by.  With two losses, IU’s Big 10 record falls to 6-5.

IU returns home following a week off to battle Purdue and Iowa.  The Boilers have a tough time scoring on the road.  As a result, their only road win came against Ohio.  Not Ohio State, but Ohio from the MAC.  With a full week to prepare, I like IU to beat Purdue.  Iowa is a different animal away from Iowa City with a 3-2 record featuring wins against Northwestern, Syracuse and Iowa State.  One of the losses came against Nebraska, who Indiana beat at their place.  Luka Garza kid is a beast who doesn’t give a damn where he’s playing.  I think Indiana splits to run its record to 7-6.

Another tough two-game road stretch comes at Ann Arbor and the Twin Cities against Michigan and Minnesota.  Let’s start with the second one, which is easier.  As is often the case, the Golden Gophers are really good at home (9-1) and awful on the road (0-6).  Picking Indiana to go to the Barn and steal a win is like hitting an 18 in Blackjack – once in a while it works, but it’s foolish as hell.  Michigan is a different animal.  On paper, IU should be an underdog, but the Wolverines have lost four of their last five.  By the time we get to February 16th, they will either have righted the ship or cratered.  I’ll be a realist and pick IU to lose both, but the Michigan game could provide an upset win to counter an unexpected loss – Big 10 record falls to 7-8.

Indiana returns home for its only home game right in the middle of a stretch with a pair of road games both prior and after.  If Indiana can’t beat Penn State at Simon Skjodt Assembly Hall, the resume’ takes a significant hit.  Indiana wins – 8-8.

The next four games will determine whether IU ends its season in the NCAA Tournament or the NIT.  The road games come first at Purdue and Illinois.  After watching Illinois throttle Purdue at Mackey, it’s hard for me to foresee enough good things happening in Champaign for the Hoosiers to overcome Kofi Cockburn and the Fighting Illini.  On the other hand, Purdue has a tough time scoring, but believe Purdue is going to come to fighting against IU in front of an insanely hyped Mackey crowd.  IU loses both to be 8-10.

Indiana is going to have to win the last two at home to get to 10-10, and they will.  We’ve already chronicled Minnesota’s troubles away from the Barn.  IU gets that win.  That leaves the final game against Wisconsin as the win IU HAS to get.  Wisconsin has road wins against Penn State, Ohio State and Tennessee, but they won’t get the win on IU’s Senior Day.  Winning out gets IU to 10-10.

The challenge in Indiana’s remaining schedule is if they lose any of the games I project as a win, they will need to make it up by winning a game reasonable people would project as losses.  How many of those are potential flips?  Michigan and maybe Purdue.

If IU goes 9-11, they will likely need two wins in Indy at the Big 10 Tournament.  Given the Hoosiers history in that event, it’s best to get to 10-10 during the regular season to ensure being on the right side of the bubble.

What a fun six weeks this will be!