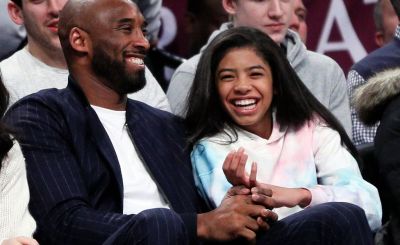 Moments like this between Kobe and Gigi Bryant interest us more than the Super Bowl.

The Super Bowl is three days away, and I’m thinking about other things.  I haven’t devoted a moment of attention to what is a fascinating matchup between the Kansas City Chiefs and San Francisco 49ers.

This is unusual for me.  Pouring over video and analytics to try to predict a Super Bowl winner is usually great fun, but enjoying that frivolity has been difficult this year.  Maybe part of it is that quarterbacks Patrick Mahomes and Jimmy Garoppolo appear likable.  Maybe it’s the lack of Tom Brady and Bill Belichick earning their way into another championship game. Who doesn’t love rooting against two guys Brady and Belichick?

But I think the distraction is in our priorities.  Processing the sudden death of Kobe Bryant is much more important to many.  It is continuing to dominate our thoughts.  I’m usually pretty quick to move on from the death of someone I did not know, but this is unique and I’ve been slow to turn the page.

Bryant and eight others were killed Sunday morning when a helicopter, dense fog, and hillside conspired to take them.  These tragedies are not so unusual they should consume us, but this was different because of the remarkable evolution of Bryant from self-immersed young athlete to devoted and mature father and leader.

His loss has profoundly affected people beyond the normal response – a few hours of sadness and empathy as we imagine ourselves in the shoes of the victims or their families.  Bryant’s death has been different because by all accounts he became the person many aspire to be.  The pictures of Bryant and his daughter Gigi – also lost in the crash – talking and laughing while watching basketball games embody memories of the moments parents and children covet.

It seems ridiculous to stop thinking about mortality, Bryant’s evolution, and being robbed of his presence and positive example to accommodate a breakdown of the 49ers running game against a balky Chiefs rush defense and Patrick Mahomes magical abilities to extend plays and attack openings with his arm and feet.

Locally, the Super Bowl also pales in importance to Victor Oladipo’s return to the Pacers after his year long recovery from a torn quadriceps tendon.  That story is not just about the joy of seeing Oladipo hit a three-pointer with :09 left in last night’s game to force overtime against the Bulls; it’s about a special human being overcoming adversity and self-doubt to emerge whole again.

Andy Reid vs. Kyle Shanahan.  Old school guy without a championship against the 41-year-old pup.  Maybe without focusing on Bryant’s death and Oladipo’s recovery, that sidebar would be worth pondering for a few minutes.  Not today though.

This week is about the Bryant Family, examining loss, finding strength, and deciding what we might learn from all of it to become better people.

The result of a football game pales in comparison.  And rightly so.  We’ll get back to frivolous things eventually, but not yet.

One thought on “In the wake of Kobe Bryant’s death and Victor Oladipo’s return, the Super Bowl doesn’t seem important”