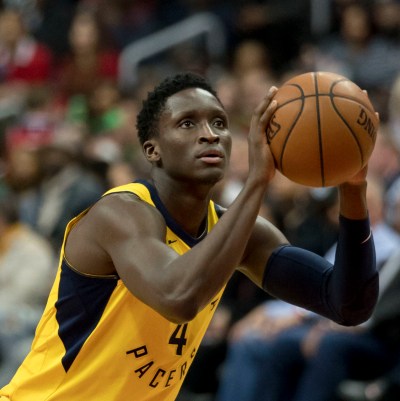 Victor Oladipo needs to learn to trust his teammates at the same level he trusts himself.

It’s been less than a week since Victor Oladipo played his first game for the Indiana Pacers since tearing his quad tendon just over a year ago, so drawing conclusions about his ability to contribute to what has been a surprisingly good season are way premature.

We can believe this though – when Oladipo shoots less than once every two minutes, the Pacers are a very good team.  When he fires up more than a shot in that time, the Pacers chances of winning suffers.

That has been true post-injury just as it was before.

Including last night’s loss to the Dallas Mavericks, Oladipo has played 114 games for the Pacers.  He has shot more than once every two minutes 66 times, and fewer 48 times.  The Pacers record during games when he shoots more than once every two minutes is 35-31 for a 53% winning percentage.  Shooting less, Oladipo has led the Pacers to a 40-8 record – winning at an 83.3% clip.

Anyone watching knows that Oladipo has not shot well in the three games since his return.  A glance at the box scores shows he’s hit only three of 21 three-point shots and eight of 39 overall, but the problem isn’t in the percentages but the tonnage of shots.  He’s shot it more than once every two minutes twice, and the Pacers lost both.

There has to be an accommodation both internally and among fans to allow Oladipo time to scrap off the rust that gathered during his year on the shelf, but Oladipo must also understand that the team that compiled a 30-17 record in his absence did not need a massive infusion of Vic to win games.  His average of 13 field goal attempts in 22 minutes has made winning more difficult rather than more likely.

No lucid basketball fan doubts that the Pacers will figure out how Oladipo can help win games in time to make a playoff run, but the challenge of getting him to turn his game down from an 11 to a seven might be the toughest coach Nate McMillan will face this season.  And no question requires a clearer answer from the front office than whether to offer Oladipo a max money extension as he heads into his final season under team control.

Again, these are concerns, not indictments.  Oladipo is three games into his comeback and has looked a lot like pre-injury Vic.  Reasonable people expected issues like this as he returned to the roster.  One of the things people love best about Victor is the way he trusts himself to deliver in all moments.  He’s always believed in himself.  Now he may be asked to maintain that confidence but deny his impulses to carry a disproportionate amount of the offensive load.

If you can divorce yourself from the emotional investment you feel in the Pacers, this is a fascinating time to watch these games, and the next two might be especially engrossing.  Tomorrow night, the Pacers will travel to Toronto and then play the Raptors again at home on Friday night.  One of the restrictions for Oladipo is to avoid back-to-back games, so a Saturday night game against New Orleans will give the Pacers a choice to play Oladipo against the Raptors or Pelicans.  If they choose the Pels, the Pacers will play a game with Oladipo followed immediately by a game without him against the same team.

A loss against the Raptors with Vic followed by a win without him would cloud optics and suspend excitement that has been generated by his return.

Again, these are solvable issues given competent leadership and a willingness of Oladipo to adjust his offensive impulse control.

The next step belongs to Oladipo.  Does he double down on his confidence in himself, repping the “Mamba Mentality” he spoke of last week as he eulogized Kobe Bryant, or does he dial back his volume shooting in favor of feeding teammates because it makes the Pacers better?