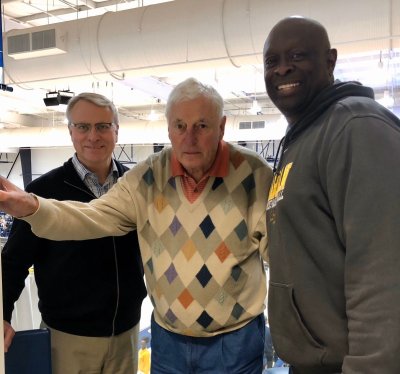 When Knight went to Marian instead of Assembly Hall, I left him.

Rumors are circulating again that Bob Knight will be back at Simon Skjodt Assembly Hall.

This time, I don’t care.

Indiana fans have been down this road before.  Knight’s steadfast refusals to come back to the building where he coached for 29 years softened a little over the last 12 months, so people got excited about the prospects for his return.

That reached a crescendo almost four weeks ago when it was speculated that Knight would be in attendance for the Ohio State game.  As is often his wont, Knight disappointed.  He took in a Marian University game instead.

For me, that was that.  I don’t mind embracing nostalgia to the point where the thought of the Old Man walking onto the court one more time would move me, but being dicked around with for years and years finally closed my mind to the idolized version of that moment.

Knight means a lot to Indiana fans who learned about basketball and life from him.  He set very valuable positive and negative examples for students who paid attention, and he was extremely generous with his wisdom about the game.  Fans have wanted to thank Knight en masse for a long time.  A visit to Assembly Hall would allow them that opportunity.

But he hasn’t come.  Instead, he indulged in a snit against the institution he felt wronged him despite all of men and women responsible being dead or retired.  Knight is mad at bricks, mortar and ghosts, so fans wait for him to honor them with his presence.

I’m done with that.

The fact is, Indiana fans do not need to be honored by Knight.  He should have been honored enough by their love and respect that he came back in spite of the residual anger he embraces because it’s amusing.  He should have valued the loyalists over his own self-centered and scornful agenda years ago.

He didn’t and doesn’t.  And so I’m finally done with him.

Sadly, Knight sees the world through the filter of his bottomless pit of anger and disdain, so I’ve decided to see him for what he is instead of the coach we revered as students.

I guess I’ve finally grown up.