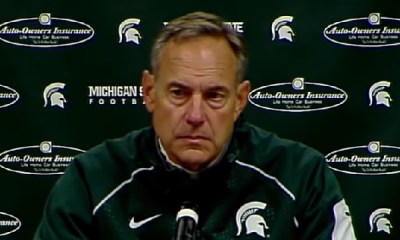 I’m sure Dantonio feels like a smart guy with $4.3-million (less taxes) of someone else’s money in his pocket.  And I’m also sure Michigan State University administrators are pleased with how this has played out.  The $4.3M isn’t theirs, so why not give it to a coach who rebuilt Spartans Football into a relevant entity.

Dantonio is not exactly resigning as a wealthy hero.  He and others are being sued for wrongful dismissal by a former recruiting coordinator who alleges Dantonio was complicit in knowingly recruiting a sexual predator to campus as well as violating several NCAA rules.  The program has also wobbled a bit over the past four years, compiling a 27-24 record over the last four seasons after nearly a decade of excellence under Dantonio.

But Dantonio put the bonus in his pocket regardless, claiming that his resignation has nothing to do with the lawsuit.  He said yesterday that he wants to spend more time with his family, and that he did not want to talk about the lawsuit because his resignation is a cause for celebration.

Maybe for a guy without a conscience, pocketing $4.3M because he adhered to the letter of a contract but not the spirit is a reason for a big party.  That kind of cash can buy a very comfortable place to lay your head at the end of the day while pondering decisions.

What Dantonio needs to remember is that his bonus came from somewhere.  It might not have belonged to a specific person, but neither does the money funding loans that current students will pay off for the rest of their lives.

Students at Michigan State University are incurring a lifetime of debt for the privilege of trying to better themselves there.  It’s instructive to know that $4.3-million could pay the tuition for 252 Michiganders for a year – or endow 63 four-year scholarships.

Dantonio took the Spartans to 12 bowls, including one Rose Bowl and two Cotton Bowls.  He leaves with more wins than any coach in Michigan State history, and the university has certainly benefitted from the notoriety the football program brought during his tenure.

Given the extreme wealth provided to Big 10 athletic departments through media contracts, there is no argument Dantonio earned his salary and other bonuses, but a retention bonus of $4.3-million for a coach who retires a couple of weeks after it’s deposited in his bank account?  That should raise Dantonio’s own eyebrows as well as those who understand money is money, regardless of the source.

Dantonio used to be the face of coaching excellence in Big 10 football.  Now, he is the face of a convenient combination of good timing and greed.

Some might think it a fair result if the lawsuit was won by the recruiting coordinator and the judgment against Dantonio required a $4.3-million payment.  But then that cash would just wind up in the pocket of yet another person who didn’t earn it.