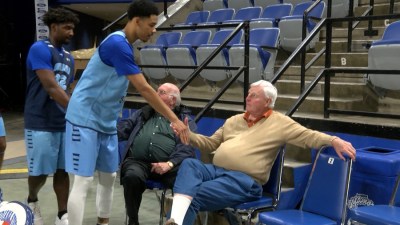 Bob Knight was at home at Indiana State yesterday. Will he ever be home at Assembly Hall again?

So, I wrote yesterday about how I am no longer invested in former Indiana coach Bob Knight returning to Assembly Hall, and how being jerked around by Knight has grown tiresome.  The phone started ringing as soon as I published the post.

On the other end of the phone for the rest of the morning were former Knight players, each certain that Knight has very little to do with the decision making and his avoidance of Assembly Hall.

When Knight went to a Marian University instead of the Indiana vs. Ohio State game on January 11th I felt like I had been played.  Yesterday, Knight watched an Indiana State practice with his son Pat.  He’s scheduled to attend the Indiana Pacers vs. New Orleans Pelicans game this Saturday night with former Purdue coach Gene Keady as part of the Basketball Day Indiana celebration.

At 2p, a few hours before the Pacers vs. Pelicans, Indiana will host Purdue.  Knight is rumored to be planning to attend that game as a public return to the building where he coached the Hoosiers for 29 seasons.

As I wrote yesterday, I am no longer enthusiastic about Knight coming back to Assembly Hall.  The rumor proliferation began to feel like manipulation – as though an easily amused guy with nothing better to do was yanking the chains of those who respect him – maybe a guy who used to eat at the Jiffy Treat in Bloomington who had a closet full of red sweaters.

The IU Basketball alums who took the time to call said the same thing – Knight has dementia and his wife is the cause of the difficulties in engineering a successful return to Assembly Hall.  I have no reason to distrust any of those who called.  We’ve spoken many times before without lying to each other.

So it seems my angst was misdirected.  I understand a wife protecting a husband who is battling an erosion of his mental capabilities.  Throwing him into an arena, even one with which he is intimately familiar, can be startling for a man battling dementia.

If he comes back this Saturday, we’ll hope for the best.  Knight being received warmly would be a nice moment for those who love him.  It would be great if he understands what the ovation he’ll receive means.

There are a lot of Indiana Basketball fans who remember what he meant to IU and would like to thank him.  Maybe that opportunity comes this Saturday and maybe not.  Regardless, it might be time to stop investing in Knight coming back for a bunch of reasons.