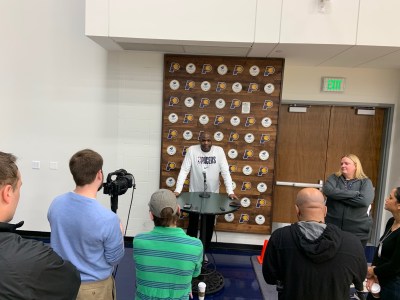 Nate McMillan stood at a table during his media availability today to try to maintain safe distance from the media.

Responses to the spread of the Corona Virus have caused many sectors of our society to make adjustments to our routines.  Sports is no different.

Some of the new protocols are a pain in the ass, but others might help eliminate source of annoyance for fans and athletes alike.

The Pacers will play the Celtics tonight, and the NBA is making health a priority as concern over the spread of the virus is heightened.  This morning’s shootaround media availability, which is usually very relaxed and a good opportunity to get one-on-one interviews, was held at a table and podium.

The NBA will have a conference call for owners tomorrow to discuss next level possibilities, which will include playing games in empty arenas and limiting travel for staffs.

Fear of a pandemic on the level of the Spanish Flu in 1918 is causing inconveniences, but might also help eliminate sources of annoyance for fans and athletes alike.  Because we are vigilant in maintaining a positive outlook and trying to utilize panic as a level toward a positive result, here is a list of five steps in the right direction that might be included as pro, college, and high school basketball evolves to the Corona Virus world: