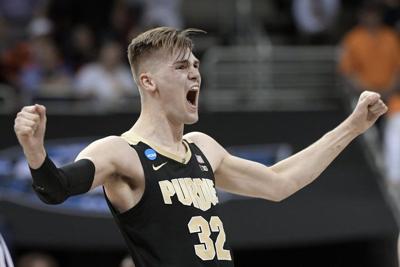 Matt Haarms haircut and emotional outbursts will be missed by fans, but his productivity will likely be filled quite nicely by others.

Matt Haarms is moving on.

Haarms became famous more for his hair and celebrations than his productivity during his three seasons playing for Purdue, and fans will probably miss those two meaningless attributes.

Purdue announced yesterday that Haarms has entered the transfer portal as a grad eligible player and so the hair, celebrations, and 7’3″ frame will enjoy their final year of college basketball elsewhere.

Last year, Haarms averaged 8.6 points and 4.6 rebounds per game, as the Boilermakers receded from being an Elite Eight team to being a likely NIT participant.  After Isaac Haas graduated, it was assumed Haarms would see an increase in his numbers.  Instead, they digressed.

Purdue fans will miss their peacock – the rim protector who was never a bulk scorer or rebounder – but won’t miss what he brought to the team statistically.

Haarms will be a prized transfer for someone, but they will probably learn the same thing about Haarms that Purdue fans did – that he’s impossible to ignore for all the wrong reasons.

Can’t blame Haarms for deciding to roll elsewhere.  That’s a decision each student-athlete has to make.  But I can’t blame Painter of Purdue fans remaining equally excited about the 2020-2021 season despite his departure.