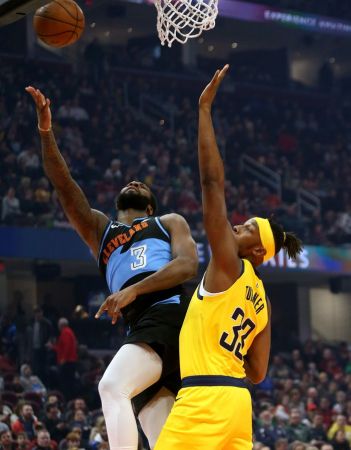 This is what the world looked like on the last day of February. Who knew the final day of April would be what it is? To debate what we believe September will bring is asinine.

On the last day of February, the Indiana Pacers beat the Cleveland Cavaliers 113-104 in front on 19,432 fans at Quicken Loan Arena.  T.J. Warren scored 30, and both Domas Sabonis and Myles Turned posted double-doubles.

The following day, Indiana lost by a single point 67-66 to Illinois at the State Farm Center in front of 15,544 orange clad fans.  Kofi Cockburn’s six blocks made scoring inside tough for the Hoosiers, so Indiana fans anguished over the Hoosiers spot on the bubble for an NCAA Tournament bid.

Two months later, sports are gone from our lives.  Gamblers have been forced to resort to wagering on Russian ping pong and claiming races at Gulfstream, Oaklawn, Remington, Tampa, Fonner, Will Rogers, and Los Alamitos.

NASCAR has shifted from roaring cars to video games, and the NBA 2K League will tip off its season next week.  NBA and Major League Baseball executives and players have no idea when they might start training so their seasons might be saved.

Fans and media are looking ahead to the fall and pondering the possibility of college and NFL football to be played – in front of live fans or empty stadiums.  The discussions quickly become contentious.

Those who campaign for a resumption of life as we knew it are depicted as heartless and greedy.  They are seen as willing to sacrifice the lives of others in order to get their football fix.  People who want to shutter stadiums until an effective vaccine is developed and deployed are hysterics who need to understand that people die of all kinds of things.

Today’s truth is that we have no idea what the world will look like in two months, and that instead of whining about people who don’t share our personal views about how we should respond to the challenges presented by Coronavirus, we should acknowledge decisions regarding the fall sports calendar require information unavailable today.

There is nothing weak about admitting we don’t know what the future holds.  In fact, not knowing the future – while disturbing – is the only part of our lives that is utterly predictable.  Yelling at each other about a set of facts we do not yet have access to may be fun, but it is also futile.  Instead of inventing a future about which we can vehemently disagree, maybe we should accept the reality that a lot of impossible to predict things can happen in two months.

Our lives have been interrupted in a bizarre way.  Financial health has been altered just as our physical lives have been threatened.  Most of the diversions that provide relief from routines have been suspended.

These are not good times.  But they are not made better by our compulsion to create disagreements from possibilities that may never come to pass.

College football may start on time in front of live fans, or it may not start at all.  The NFL may need to delay its start for a few weeks – or not.  Maybe both will need to furlough operations for the entire season.

The facts necessary to make those decisions are unknowable today.  That makes us uncomfortable, but embracing that discomfort beats the hell out of responding with anger toward those who disagree.

Maybe the lesson of this unsettling period will be to accept the things we cannot change,
courage to change the things we can, and the wisdom to know the difference.  That’s the Serenity Prayer.

Serenity would serve us a lot better than our current state of acrimony as we debate what the world might look like in two months.