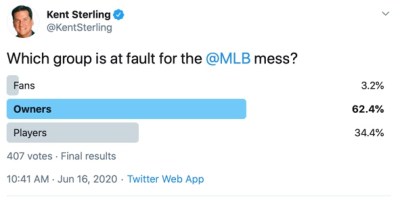 It’s time to take back our game.  Baseball has dicked around long enough with our hearts.

When baseball resumes, keep your money in your pockets.  Hold baseball owners and players accountable for their indifference to you by refusing to line their pockets with your cash.

For the history of our national pastime, owners have assumed that fans would continue to show up, and show up, and show up, no matter the inane crap they pulled during negotiations with players.  There have been strikes, lockouts, cheating, intentionally lengthened games, and other tactics to maximize profits at the expense of players and fans.

The difference between the fans and players is that we have no collective seat at the table – no standing during talks.  Our feelings are of no interest.  We are allowed to fund teams and players contracts by buying tickets, beer, hotdogs, jersey, and hats, but our beliefs about the game are beyond the interests of the principles.

During the COVID-19 delay, the owners are kicking the can down the road to save money.  The players want to make as much money as they can by playing ASAP.  Fans wait patiently to be allowed to watch games that may never happen.

I put out the above twitter poll yesterday that asked who we blame for the unpleasantness that has led us the potential for the first year without professional baseball since 1868.  I added “fans” as a response for my own amusement, but when 3.2% responded that fans are the cause of this impasse, I began to think.

In a scene during The Right Stuff, astronaut Gus Grissom says about the U.S space program, “No bucks – no Buck Rogers!”  That works for baseball too.  Without fans’ eyeballs and dollars, baseball would only be played in parks by children.  As long as fans sit idly by as owners and players squabble about our money, this idiocy will continue.

It might just be time to do something else with out time and other sports to support.  Granted, owners in the NBA and NFL are also billionaires, and players are also millionaires, but they seem to have a much better grasp on how they might trick us into believing we are important.  Baseball is unique in its overt obliviousness to fans’ presence, let alone concern.

As long as we spend our cash on their product without critical thought, baseball will refuse to acknowledge fans as anything but necessary nuisances.

Flipping the script will require one of two things –

The organized revolt will never happen.  As pissed as I am at baseball, I have much better things to do with my time than march in protest outside Wrigley Field or Great American Ballpark.  The bizarre wing nuts who would show up would bring more harm to our cause through their presence than to fortify it.  Let’s forget about protests.

So it’s up to a significant number of individuals to hit the tipping point together, and refuse to buy tickets and swag.  I love an afternoon at Wrigley Field as much as anyone and more than most, but until the spiritual foundation of the game reaches the same level of import to owners and players as the financial, I’m out.

There are front offices – like the Reds and Cardinals – who value fans at a much higher level than the Cubs, but a stand is a stand.  And I haven’t heard Reds owner Bob Castellini or Cards owner Bill DeWitt Jr. apologize, so to hell with them too.

As a guy who spent more than $20,000 on Cubs season tickets, I know what it’s like to write that big ass check and then refuse after being treated with indifference.  It’s liberating and fun.  I highly encourage it.

It’s time to reassert our position at the table as the source of revenue to the owners and players who refuse to consider us seriously as partners.

If Major League Baseball is played in 2020, it will be in mostly empty stadiums as we continue to try to stop the spread of COVID-19.  Maybe next year they will be mostly empty because we decide to spend our money on something that makes us feel better than going to a ballgame.

Players strike.  Owners lockout.  The time has come for us to boycott.