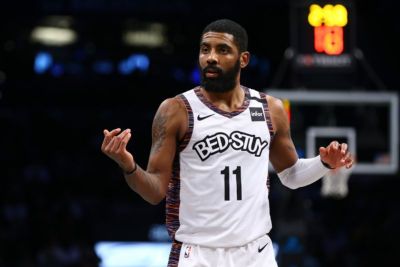 If reports are true that Kyrie Irving is thinking seriously about forming a league to compete with the NBA, he needs to rethink his plan.

If Kyrie Irving wanted more minority owners and GMs in the NBA, he should have signed as a free agent last summer with a team that has one.

Instead, Irving signed with Brooklyn, whose GM is New Zealander Sean Marks and owner is Taiwanese/Canadian Joe Tsai.  Irving’s contract runs through 2023, so he’ll have another chance to affect change then.

And now there are reports that he is telling teammates that they should form their own league.

Look, I get it.  Black players are the reason the NBA is successful, and white people are the principle owners of 29 out of 30 league franchises.  Reflexively, that makes a for us/by us version of the NBA sound righteous.

A quick glance at the pragmatics tells a different story.

Irving is 28-years-old and by the time he turns 31, he will have been paid $230 million to play basketball.  His endorsements are paying him at least another $20 million per year, and that number is going to do nothing but go up.

Most other players may not earn like Irving, but the average salary of an NBA player is a very respectable $7.7 million.  Luring other NBA level talent to jump over to a start-up operation where the compensation would pale in comparison is a non-starter.

The NBA coupled with social media is one of the most dynamic global marketing platforms in history, and that equates to power and more cash as an influencer for NBA players – especially those with Irving’s profile.

That’s a lot of cash and cache to walk away from in favor of a financial and social experiment almost certain to fail.

Putting together a league is exceptionally complex with many areas of investment and attention.  The odds of being a short-term success are nil, and long-term sustainability is unprecedented.  Even the cost of a six-team league would be massive.  Challenging a global market leader like the NBA head-to-head would open a huge financial sink hole regardless of how deep the new league’s pockets are.

Couple the catastrophic financial risk of the new league with the fact that the NBA is a business that appears to operate in a spirit of relative fairness and partnership with players, and the notion is outrageous.  Owners and commissioner Adam Silver appear to understand and embrace players’ ability to discuss and encourage social change.

The only way a new league could possibly have a chance at viability would be for LeBron James to participate.  James drives ratings and attendance.  He moves merchandise in bulk.  And he is also way too smart to participate in this giant boondoggle.

There are ways to accomplish what NBA players covet, but they already enjoy the perfect platform and the means to capitalize on it.  A new league is unneeded if Irving uses correctly his position in this one.