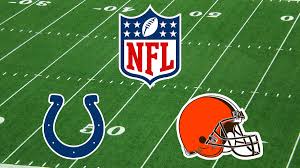 The Colts are going to beat the Browns Sunday.  Here are 10 reasons why:

10 – Myles Garrett not enough to get to Philip Rivers.  Last week, NFL analysts spent a lot of time talking about how Khalil Mack, Robert Quinn, and Akiem Hicks would be all over Philip Rivers – causing him to throw it early and to the Bears secondary.  Rivers was sacked once in Chicago – and it was self-inflicted to keep the clock ticking toward the end of the first half.  This week, all people talk about is Garrett, who is averaging a sack and a quarter per game.  I’ll begin doubting the pass protection of the Colts when there is reason to – not before.  Certainly not this week – unless Anthony Castonzo can’t go – and then I may sing a different tune.

9 – Mo Alie-Colx is the top rated TE in the NFL.  I like Pro Football Focus stats in moderation.  What they provide is A tool – not THE tool to figure out how well players contribute to the whole.  But if Mo is leading the rankings, that deserves some mention in why the Colts are winning or will win.

8 – No lost fumbles for the Colts.  No statistic is more important in turning losses into wins – or vice-versa – than turnovers.  Not only have the Colts not lost a fumble this season, they have only fumbled once (Philip Rivers against the Vikings – recovered by Braden Smith).  This is a huge point of emphasis for running backs coach Tom Rathman, and was supposed to be a weakness of Jonathan Taylor.  So far, so good.

6 – Rigoberto Sanchez is a better punter than Jamie Gillan.  Sanchez has had three punts returned in four games for a total of 18 yards.  Nine punts by Gillan have come back for a total of 81 yards.  This is a small part of a field position discussion – so let’s move onto that as the #5 reason.

5 – Field position battle will go to Colts.  Frank Reich talks about “hidden yards,” and no team is better at finding them than the Colts.  Because of midfield first downs and punts that stick opponents inside their 20, the Colts have a field position advantage of 12 yards per drive.  That might not sound like a lot, but it is often the difference between a punt and field goal.  Four El Lego field goals were the difference last week in Chicago, and might be critical this week too.

4 – Colts pass protection is stellar.  I alluded to this in #10.  The combination of the five offensive linemen, scheme, and Rivers quick release makes it very tough for opponents to either get to Rivers or hurry him.  According to Pro Football Focus, Rivers has been pressured a total of 27 times this season, and has not thrown a pick once under pressure.  When blitzed, Rivers completes 74% of his passes with a passer rating of 124.5.

3 – Julian Blackmon and DeForest Buckner were defense’s missing pieces.  Two areas of improvement for the 2019 Colts defense were a three-technique defensive tackle and a playmaking free safety.  General manager Chris Ballard addressed the first by acquiring Buckner in a sign and trade, and then drafted Blackmon in the third round to check the second box.  Buckner was expected to be a beast (and he has been), but Blackmon has been a huge surprise.  He’s excelled after a training camp on the PUP list as he rehabbed a surgically repaired ACL.  Malik Hooker’s torn Achilles opened the door for Blackmon to shine.  Last week in Chicago, his interception and three passes defensed were huge difference makers in the Colts win.

2 – Nick Chubb is down.  Regardless of the bad-assery of the Browns offensive line, losing the third leading rusher in the NFL is going to hurt.  The Browns will still be formidable up front, but Chubb’s absence will make the Browns offense less explosive, and it will take explosive plays to beat the Colts.

1 – Rivers is only throwing it to Colts.  The rap on Rivers when signed as a free agent after 16 years with the Chargers was that he will throw it to the other team too often.  Training camp showed Rivers as advertised.  He was precise on 20 throws, but made a bad read on the 21st and threw it to the defense.  It happened virtually every day.  Over the last two games, Rivers’ stat line has been clean of interceptions.  He benefitted from a Khalil Mack drop at Soldier Field, but he was still clean.  When Rivers throws less than two picks, his teams have been very tough to beat.  If Rivers throws it to Colts and only Colts Sunday, the Colts will be 4-1.