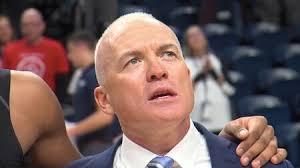 Patrick Chamber is no longer the basketball coach at Penn State because he said the wrong thing to the wrong player – whether he knew it at the time or not.

Patrick Chambers has left the Penn State basketball program because he and his family “need a break to reset and chart a path forward.”

What has exhausted the former coach for the past year is an allegation by a former player Rasir Bolton that Chambers referenced a noose around his neck during a conversation.  That allusion bothered Bolton to the point that he transferred.

Times are changing.  Young men and women are changing, and leaders/coaches/managers better change with them because if they don’t, a couple of very bad things are going to happen. First, they will cause unnecessary damage to the psyches of the young men and women they lead through language tand imagery.  Second, they will be subject to the same type of “reset” Chambers is in the midst of.

Back in the day, part of being an athlete meant figuring out how to tolerate abuse – both verbal and physical.  It was a point of pride to be able to tell stories about the garbage we had to endure, and how nothing could rattle us now because we had faced the wrath of Coach (insert name here.”

We can debate whether this absolute intolerance of hateful imagery and rhetoric is good or bad for society, but there is no denying that people are both tired of – or more accurately – incapable of listening to grotesque unpleasantries.

A few years ago, I was at a bar with a friend talking to two girls.  One of them went to Purdue, so as an Indiana guy, I began offering a stream of amusing insults about Boilermakers.  The girls walked away.  My friend and I tried to find them because he was dating the non-Purdue grad.  Turned out they went home because the Boiler was boiling about my witty rebukes of West Lafayette.  I remarked to my friend, “Don’t people know not to listen to me?”

It’s time for empathy to trump what is perceived as hate speech – for the crass to examine their priorities and accept that this is not 1975 anymore, and “All in the Family” is no longer America’s #1 show.

It’s not OK to upset people because our hearts are pure even if our mouths aren’t.  No excuse or apology is good enough to stem the tide of angst against those who offend.  There is no such thing as unsaying something that has already been hurt.  There is no seven-second delay in real life as there is at radio stations.

It’s time to erect additional gates between our brains and mouths where offensive language we may not even know we are uttering is checked, re-checked, scrubbed, and then deleted.

My dad never would have survived this, but maybe with some hard work and empathy we can learn that words aren’t heard as they are offered but how they are interpreted through the filter of the listener, and maybe we can avoid “resets” like the one Chambers has been forced to embrace.