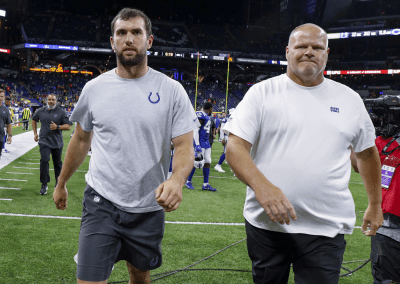 Many feel Andrew Luck forfeited his right to a spot in the team’s Ring of Honor on the night he retired. I beg to differ.

But a here’s a grim truth about the Ring of Honor – it is filled with flawed players.  Looking at the names and resume’s, it’s impossible to not include Luck among them.

I’m not talking about retiring his number.  That is a privilege reserved for the best of the best.  Peyton Manning is the only Colt to have his number retired since the move from Baltimore in 1984.  Rightly so.  Manning is a first ballot Hall of Famer who will forever be remembered as a an all-time great, despite the team releasing him after 2011 when his health was frail.  Manning has a statue – statue guys get their number retired.

Andrew Luck is not a candidate for that honor.  He never won an MVP, never went to a Super Bowl, and never achieved the cult of personality Manning earned.  He could have been next in the Johnny Unitas and Manning lineage, but chose another path.  The Colts should not reward Luck for what could have been.  He is what he is – a successful quarterback who left potential accomplishments on the table in order to enjoy to avoid the pain and risk the NFL requires of its players.

The Ring of Honor recognizes a different level of accomplishment.  Here is a sample of the qualifications of three of its current members:

Jim Harbaugh is in the Ring of Honor.  In four seasons in Indianapolis, Harbaugh cobbled together a 20-26 record as a starter.  Sure, Harbaugh was oddly spectacular in 1995, leading the Colts back from 21-point deficits twice.  His work was directly responsible for the Colts almost winning the AFC Championship Game in Pittsburgh that season, but overall he was ordinary at best.

Wide receiver Bill Brooks is in the Ring of Honor too.  He was good during seven years with the Colts, making a playoff appearance during the 1987 strike season.  Ranked the 177th wide receiver in NFL history by Pro Football Reference, Brooks was never invited to a Pro Bowl.  Great guy who has worked for the organization for many years.

Left tackle Chris Hinton is in the Ring of Honor.  As a Colt for seven seasons, Hinton was invited to six Pro Bowls, but he is best known for being a key piece in two huge trades.  The Colts acquired Hinton from the Denver Broncos for the draft rights to John Elway, and was sent to the Falcons along with Andre Rison for the #1 pick in the 1989 Draft, which was used to select Jeff George.  Hinton was outstanding as a person and tackle, but team success was lacking during his Colts career.

If the Colts weren’t (mostly) a back marker in their first 15 years in Indy, these guys would never have been feted.  But if a team is going to have a Ring of Honor, they need players in it!

Luck played six seasons for the Colts, missing the entire 2017 season with a shoulder injury.  His record as a starter is 53-33, and his teams went to the playoffs four times.  He won four and lost four in the playoffs and was a four-time pro bowler.  There were brain fart throws, but Luck had the ability to overcome them, like the insane 28-point comeback win against the Chiefs in the wild card round of the 2013 playoffs.  This was Luck at his worst and then best – down 38-10 early in the third quarter, Good Luck and the Colts scored 35 points in a wild 23 minutes.

I’m not willing to absolve Luck of all guilt in letting down the Colts and their fans, but as long as Harbaugh, Brooks, and Hinton are in the Ring of Honor, Luck should be there too.