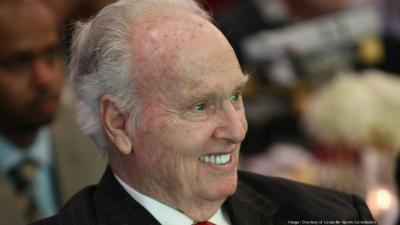 Paul Hornung just never looked right unless he was smiling.

Sure, he won NFL Championships with the Packers and the Heisman Trophy at Notre Dame, but he was the center of the Louisville social universe for decades.  Muhammad Ali is undoubtedly the city’s most famous native, but Hornung was the most visible and longstanding.

If you knew where and how to have fun in Louisville over the last half-century, you ran into Paul Hornung frequently.

My family liked to play the horses when we lived in New Albany, Indiana – a town across the Ohio River from Louisville.  Whether we were at Churchill Downs or Louisville Downs, I can’t recall a visit when he didn’t see Hornung.  And if he was somewhere, it was impossible not to see him because no one looked like Hornung except for Hornung.

Everything about him was unique.  His hair – long and blond and then white; posture – tilted back to counter the weight of his well-earned paunch; and confident stride – as though he owned whatever property he inhabited – gave him an irresistible glow.  Hornung wasn’t simply charismatic.  He was charisma.

Every conversation I had with Hornung made me feel like we were friends.  He was comfortable with people – all people – and we were comfortable with him.  I’m sure he never remembered any of our interactions, but they were unforgettable for me.  Everyone with whom he spoke felt like they were his friend.  Maybe because he spoke with so many people, he assumed everyone he came across had at one point or another been his friend.

During a media junket for the Kentucky Derby, the radio station where I worked broadcast from the Kentucky Derby Museum adjacent to Churchill Downs.  Parking at the Museum was difficult.  Instead of allowing us to park near the entrance to unload our equipment, the museum staff forced us to an area 200 yards away.  The guard said we would be towed if we left the car there too long.  Horning was one of the pre-arranged guests and he stopped by our table for almost an hour.

During the 12-minute news break at the bottom of the hour, Hornung and I had a chance to talk, and I asked him what it was like to be Paul Hornung.  He laughed that Paul Hornung laugh, and said, “I enjoy it quite a bit.”  We chatted, and I apologized for pestering him, assuming he would rather recharge during a little down time.  He smiled and told me if he didn’t enjoy my company would would have left.

On our way out of the museum, there was a Lincoln Town Car parked haphazardly immediately outside the door to the museum.  The license plate read “Hornung.”

That communicated exactly the relationship that existed between Hornung and his city.  He took care of Louisville and Louisville took care of him.  Towing Hornung’s car was unthinkable.  He played by a different set of rules, and rightly so.  Instead of being annoyed, his aura made these small trespasses part of his charm.

Paul Hornung was an old school social swashbuckler – a wild man while being considerate, congenial, and accommodated.  He was the NFL’s Errol Flynn, and he was one of the few men I’ve come across worthy of distanced worship.

Louisville is a better city because of him, and it is less fun for his absence.