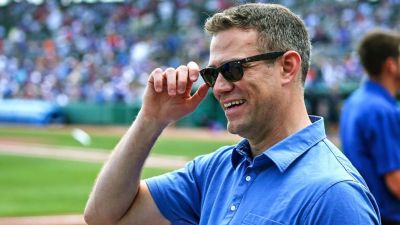 Cubs president Theo Epstein is leaving the team on Friday, and there is a lot of chatter about what nefariousness occurred to cause this change at the top of the franchise’s front office.

The answer appears to be that Epstein is leaving because the time has come.  It’s simple as that.

Sometimes the most least complicated answer is accurate, despite our desire for a juicy soap opera narrative.  It would be great if Theo burst into the office of owner Tom Ricketts and demanded enough cash to sign all of the guys scheduled to hit free agency at the end of the 2021 season (Kris Bryant, Javier Baez, and Kyle Schwarber).  Ricketts tells him to “Get the hell out of here! And make an appointment next time you want a second of my time!”

That would have been juicy, especially if Epstein then leaned across Ricketts desk, gave him a slap across the top of the head, and said, “Listen, Ugarte, you raise your voice to me again, I’ll squeeze you like the rich pimple you are!”  [Ugarte was the name of Pette Lorre’s character in Casablanca, the all-time great film written by Theo’s grandfather and great uncle.]

Of course, none of that happened.  Epstein came to accept that once a leader sets in place a succession plan, the succession occurs.  That plan involved Jed Hoyer, Epstein’s lieutenant, taking the reins a year from now, when Epstein’s contract was to die a natural death.  It slid up to this Friday because in baseball, you are either all in or all out.  Halfway doesn’t cut it.

So Epstein leaves the Cubs without drama, and Hoyer needs to make some big decisions in a hurry.  Will he talk Ricketts into one more ride with Bryant, Baez, and Schwarber, or will he try to deal the Cubs into another group of potential generational talents capable of contending for another world championship?

Maybe Epstein didn’t want to separate the nucleus that brought the Northside of Chicago it’s first ever World Series crown (remember, the Cubs played at the West Side Grounds until 1916, when they moved into what is now Wrigley Field.

Whatever comes next for Epstein, his legacy as one of the greatest sports executives in Chicago Sports history is secure.  Other than George Halas, there is no one close in terms of impact upon his team or the city.

Hoyer has big shoes to fill in how he performs while president.  Hopefully, he can approach the bar set for operational excellence, and then easily clears it for drama in how he leaves.