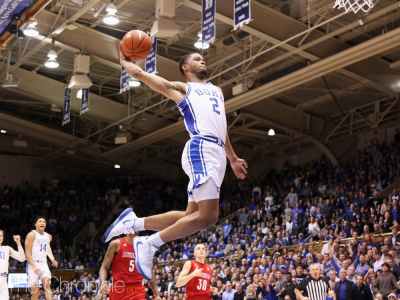 Another draft night, and no Pacers Woj-bombs. But Cassius Stanley might just win a slam dunk championship!

NBA Draft night is like Christmas to fans.  Some teams provide fans with beautiful presents festooned in fancy colorful suits, and others swap gifts with other teams like they are at a white elephant party.  Still others have routinely forget the spirit of giving.

Add Cassius Stanley to Goga Bitadze, Aaron Holiday, Alize Johnson, T.J. Leaf, Ike Anibogu, and Georges Niang on the list of lumps of coal the Indiana Pacers have provided fans since Myles Turner and Joe Young made us feel like Ralphie opening his Red Ryder B-B gun in A Christmas Story.

The Pacers dealt Caris LaVert to the Brooklyn Nets on draft night in 2016 for Thad Young, but that counts as the only dramatic moment in the last five drafts, and Thad was more like a food processor as a present.

Clearly, Pacers president Kevin Pritchard feels no compulsion to see the eyes of his fans light up on draft night, nor any compulsion to help ESPN’s Adrian Wojnarowski add to his enormous pile of Twitter followers.

Fans and media get excited on draft night, and Pritchard always disappoints.  He understands that only rubes believe a team that wins draft night will then win games, and most Pacers fans are not rubes.  “Experts” might have you believe a championship was won last night.  It almost certainly was not.  In the last seven drafts, only two top picks have been selected to play in an all-star game, and none have won a championship.  In the last eight seasons, three teams have “earned” the honor of drafting #1 twice (Cleveland, Philadelphia, and Minnesota).

So we can excuse Pritchard for occasionally trading a pick for a live body with a proven track record.  His Pacers keep finding a way to win 50-ish games before bowing out in the first round of the playoffs.  That’s what Thad Young and Malcolm Brogdon have been capable of, and there is nothing wrong with that.  Are they worth what LaVert has become and R.J. Hampton will be?  Young was a great dude and competent player, and Hampton’s future is unknown compared to Brogdon.

The Pacers are what their record says they are – a good team filled with good people who work hard to win at a level just beyond their talent.  It’s not sexy, but it keeps hopeful butts in seats.

With second round picks, Pritchard tries to find a guy with whom the Pacers might hit the jackpot.  These are Powerball type players who might crash the rotation with a series of great breaks – or, much more likely, they will crash and burn out of the league.  So far, Pritchard has been 0-fer with his second round picks.

Maybe Stanley with be different.  He is a freak athlete from Mike Krzyzewski’s Duke program with a better vertical jump than Zion Williamson – at least it was when Duke measured him.  He can shoot it a little bit, and while not long (78 inches tall/79 inches long) Stanley can defend the perimeter because he is lightning quick.

He averaged 12.4 points per game last year, but dropped 20 or more on Georgetown, Miami, Louisville, North Carolina, and Virginia Tech.  What does that mean?  Well, it could mean he shows up for big games – or, maybe he fades in less important games.  Hard to say, and that might be why he fell to #54.

While Stanley is a one-and-done, he’s 21-year-old.  That could mean he has an uncommon maturity for his class.  Or, maybe he grew late and his NBA agent father held him back because he wasn’t being recruited at the Duke level with the high school class he chronologically belonged to.  Who knows?

What we do know is that no one is going to find Pritchard guilty of managerial malfeasance if Stanley craps out.  General managers passed 53 times last night when they had a chance to grab Stanley.  He is unlikely to be more than a widget level player, and the Pacers may never win or lose a game because of him.  Stanley may win a slam dunk championship at Bankers Life Fieldhouse during the all-star break, but he’s less likely to help the Pacers win their first NBA title.

That’s what another highly anticipated draft night brought the Pacers and their fans.  Another Christmas came and went without joy.