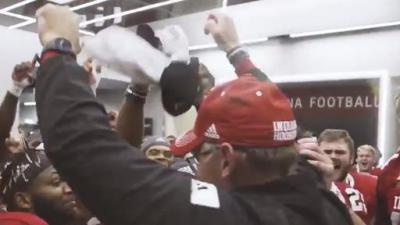 Tom Allen has raised his hands in the locker room after all four games this year. Tomorrow, Indiana fans hope for a fifth!  Tomorrow, he will tell his team, “I love you guys.”  And then they will play like Hoosiers.

“And David put his hand in the bag and took out a stone and slung it. And it struck the Philistine on the head and he fell to the ground. Amen.”

Can #9 Indiana beat #3 Ohio State tomorrow in the biggest game for the Hoosiers program in more than a quarter century?

What could be more Hoosiers 2020 than that?

A growing legion of IU fans are asking themselves if IU can go all Hickory High on Ohio State tomorrow as they count the hours to kickoff.  Not long ago, Hoosiers awaited kickoff against the Buckeyes like a death row inmate anticipated the warden unlocking the cell door to begin the walk to the electric chair.  Not anymore.  Not after Indiana beat Penn State, Rutgers, Michigan, and Michigan State to set up this crazy showdown.

There are plenty of reasons to believe Ohio State will win.  Any fool could tell you IU has no chance.  Coming up with a list of reasons takes little effort and no imagination.  Here are just a few – you don’t have the time to read the exhaustive list:

Here is the only reason Indiana can win tomorrow:

Indiana doesn’t need to play better football for 60 minutes, just outscore Ohio State.  A pick six  by Tiawan Mullen or punt return to the house by Reese Taylor – or both – could completely change the calculus of the game.

If Indiana finds a way to win, no one is going to actually grade the Indiana program ahead of Ohio State, but that doesn’t mean Indiana can’t cobble together enough positive plays to carry the day.  This won’t be a best-of-seven series – just a one-game contest – and for one game Indiana can win.

Michael Penix is unlikely to have the kind of NFL career Fields is looking forward to, but that doesn’t mean that on a cloudy Columbus afternoon he can’t hand Fields a loss.

ESPN calculates the chances of Indiana beating Ohio State at 10%, and gamblers aren’t bullish in assessing the possibility of a an Indiana upset either.  Right now, you would need to wager $1,300 on an Ohio State win to net $100.  But football isn’t played by a computer, sports book, or gamblers.  There will be human beings in pads led by other human beings playing a game with a funny shaped ball tomorrow afternoon at the Horseshoe.

It’s not likely Indiana will win, but it wasn’t likely they would run the table to this point.  This has been a weird year where the unlikely has become routine, and what would be more unlikely that Indiana thwacking Ohio State to take control of the Big 10 East tomorrow?

I doubt Allen is going to hoist kicker Charles Campbell on his shoulders with a tape measure to show his team that the goal post at the Horseshoe is 10-feet off the ground just like it is at Memorial Stadium, but if the game follows what would be Pizzo’s script and the game comes down to a decision to try a 55-yard field goal to win or throw a Hail Mary, Campbell needs to look Allen in the eye and say, “I’ll make it.”

And then he needs to do it.