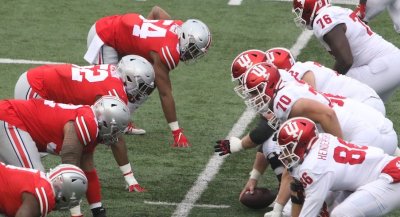 Across from each other on the field there is no doubt Ohio State is a better team than Indiana, but at the 14-seat Big 10 conference table or Zoom call, the Buckeyes and Hoosiers should be equals in a way they obviously are not.

Despite a rule enacted by the Big 10 to keep teams unable to play six games this season from competing in the Big 10 Championship at Lucas Oil Stadium in Indianapolis, the 5-0 Ohio State Buckeyes will represent the East Division in that game.

The unjust rule change will be voted on and approved by the 14 conference athletic directors this afternoon.

The Big 10 released its football schedule, canceled its season, and re-launched in a six-week period last summer, so no change of course is surprising.  These are unprecedented times in college athletics, and Ohio State playing only five games was not anticipated by the conference when it enacted the silly six-game minimum.

Before I launch into a diatribe about the lack of fairness this change represents, let me clear one thing up – Ohio State is the best team in the Big 10.  There is no question that if the Buckeyes played Indiana again, they would win.  It would likely not be nearly as close as the 42-35 score in the game played in Columbus on November 21.

Hoosiers quarterback Michael Penix tore an ACL the next Saturday as IU throttled Maryland, and has been replaced by Jack Tuttle.  Chief among the reasons IU was able to crawl out of a 35-7 hole against Ohio State was Penix.  Expecting Tuttle to be as dynamic or efficient as Penix defies credulity.

However, rules are rules.  I’m not privy to why the Big 10 chose a waterline of six games to determine eligibility, although I assume it was to protect itself from a 5-0 team not clad in scarlet and gray playing in Indy over a 7-1 Buckeyes team.  Whatever the the rationale behind the rule’s implementation, there it was – until today when the Big 10 again became the BIG ONE and Little 13.

The Big 10 understands Ohio State has a far better chance of being selected for the College Football Playoff where it will earn the conference a significant payday.  Instead of ceding that cash to the SEC or ACC, they Zoomed a fix.

If you haven’t been paying attention, college football is a big money enterprise, and the administrators who run things enjoy being paid exorbitantly for their meager contributions to its popularity, so whatever is needed to stake their claim to cash – that is what they will do.

So there is little old Indiana, having done nothing wrong being legislated out of an invitation to an event that it had previously and unwittingly been legislated into.  The Hoosiers are in the midst of a magical season of winning unprecedented in their last half century.  And there is big old Ohio State, demanding its ticket be punched despite the rule everyone agreed to just three months ago.

Fair at Ohio State is defined by being seated at the head of the table, ordering the entree for all, being served first, choosing the wine, leading the pre-meal prayer, and enjoying second helpings others are denied.  Indiana begs for scraps from the kiddie table.

“Please sir, may I have some more?”

Again, there is no doubt Ohio State is the best team in the Big 10.  Indiana is second.  That was proven in their head-to-head matchup, but at what point will Big 10 president Kevin Warren grow a pair and exert some tough love for Ohio State as he does for the other 13 member universities?

This is a sad but profitable day for the Big 10, which distinguishes it poorly from all the other days when cash trumps all and Ohio State Football drives decision making in a conference that should be audacious enough to treat all of members equally.