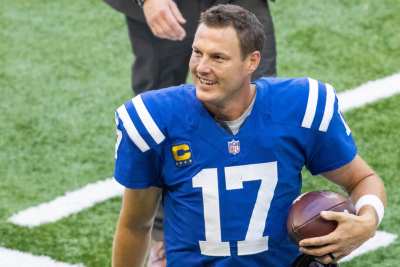 Philip Rivers is not going to kick Patrick Mahomes, Deshawn Watson, or Lamar Jackson out of the “A Block” on ESPN’s Sportscenter.

Sexy is a word that does not and will not apply to the Indianapolis Colts, and so we don’t see a lot of Horseshoes on ESPN, Fox Sports, and CBS Sports.

What America saw last night from Ravens quarterback Lamar Jackson was sexy.  He ran all over the field, winning the game with his feet and arm.  He went into the locker room with a digestive issue, and emerged when his backup suffered an injury.  Jackson’t first play back – a touchdown pass.  See?  Sexy!

Colts quarterback Philip Rivers is not sexy.  Everything about him is ordinary, other than his brain and accuracy.  He drives his kids to school, moves like a guy with a broken foot when healthy, and can’t break a pane of glass slinging the ball as hard as he can.  Now that he actually has a broken foot, there has been no noticeable decline in speed.

That’s not to say Rivers is not valuable to a team headed to the playoffs; he’s just not sexy.

Frank Reich is not a sexy coach.  He isn’t entertaining with the media, never shines a light upon himself, and has only popped on social media for teaching his granddaughter how to secure a football with her “eagle claw.”  He is such a non-sexy coach that he didn’t make GM Chris Ballard’s list of five finalists when Josh McDaniels was hired into the job Reich would accept a few weeks later as McDaniels backed out.

That’s not to say Reich isn’t an effective coach; he just isn’t sexy.

Defensive coordinator Matt Eberflus is so unsexy that fans want him fired after every loss – or painful to watch first half when the Colts defense digs itself a hole.  His schemes can tend toward the simplistic.  He’s not Buddy Ryan, Monte Kiffin, Dick LeBeau, or Gregg Williams.  Eberflus is a relentless taskmaster who demands maximum effort each play from each player and requires perfection in tackling.

That’s not to say Eberflus isn’t an effective coordinator, but he certainly isn’t sexy.

The entirety of the Colts roster is not sexy.  They are diligent, intelligent, and trustworthy.  Good citizens all.  They support each other without selfishness, and never turn into divas. They have far less interest in social media scores and marketability than playing winning football.  In this era, the construct of the Colts is remarkable, but not sexy.  If the NFL had a model UN competition, the Colts would stack trophies like cord wood.

That roster is fast and capable, but not sexy.

Colts general manager Chris Ballard is not sexy.  Colts drafts under Ballard have re-built the roster as proficient and predictable.  As anyone who walks past his suite on the media level of the press box to get food or a beverage can tell you, Ballard gets angry during games, but he isn’t sexy.  The only moment that rang untrue and awkward since Ballard arrived in 2017 was when he tried to be quotable with his infamous, “The rivalry is back on” comment after McDaniels pivoted back to the Patriots after accepting the offer to become head coach.

Ballard tried that one time to be sexy, but it didn’t work.

Indianapolis isn’t sexy.  It’s nice, friendly, welcoming, and efficient, but not sexy like Miami, Los Angeles, or New York City.  People in Indy are very cool with that.  We treat athletes like ordinary folks, and so ordinary folks who happen to be athletes enjoy it here.  Athletes like Paul George who covet adulation don’t vibe with Indy and they tend to bounce to towns where they can be fawned over.  This is a fawning free zone.

Indy is very secure with its image (and reality) of not being a sexy city, which should be sexy, but isn’t.

If you want to know why national networks spend very little time talking about the Colts and Pacers, it’s because sexy sells – in places other than Indianapolis.  Here, we like winning, honesty, and effort by bland people we would never bother.