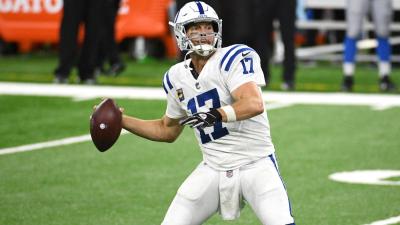 Philip Rivers has helped the Colts level rise to good this season. If that is enough, keep him for another year.

Anyone who has worked with a competent manager for 15 minutes has heard the phrase “Good is the enemy of great.”  Anyone who has watched the Indianapolis Colts play football this season mutters it to himself in his sleep.

The Colts are good, and they have been mostly good for a long time.  Only three times in the last 19 seasons have the Colts posted a losing record, and all came with backup quarterbacks (Curtis Painter and Jacoby Brissett – 2X) serving as starters.  That means the Colts have had few opportunities to draft in the top 10, which leads to greatly diminished opportunities to land a championship level quarterback.

The 2020 Colts are good too – with a 10-5 record and hopes of getting to the playoffs.  They are quarterbacked by Philip Rivers, the king of good quarterbacks (ranked #19 in QBR).  Rivers is reliably good, showing up every game for the past 15 years and doing his dadgumdest to lead his team as far as they can go with a decided lack of mobility and arm that moves only slightly less awkwardly than his feet.

Rivers has never played in a Super Bowl, but is capable of leading a good team to a good result. The Colts need to play virtually mistake-free football to counter Rivers’ lack of dynamism.  Remove the first half fumble and second half defensive pass interference penalties against the Colts versus the Steelers yesterday, and the Colts win in a walk.  But Rivers did fumble, the flags did fly, and the Colts did lose.

The Colts are very likely to win the season finale against the Jacksonville Jaguars.  After all, the Jags are 1-14.  The single win came against the Colts in the season opener before the Jags came to understand the futility of their season.  Now, they know they are terrible and will likely play to form against a Colts team with a playoff berth on the line.

If the Colts win and the Titans lose at Houston, the Colts will be AFC South champions and the four seed.  If the Colts and Titans win, then the Browns, Dolphins or Ravens need to lose for the Colts to squeak in as a wild card.  That would be a good result for a good team with a good quarterback.

And then the Colts would likely bow out after a playoff game or two.  They are 3-4 this season against playoff teams, if the Bears qualify, and seven games is a meaningful sample.  Winning consecutive games against teams who finished with 11 of more wins would be strange for a team without any area of obvious superiority.  It’s not impossible, but January runs like the 1995 Colts put together happen seldom enough that we still remember that team fondly 25 years later.

If the Colts finish 11-5 and don’t make the playoffs, they would be the first of the previous 73 teams to start a season 10-4 or better and fail to make the postseason.  Not bad, but certainly not great. It would be good.

Because 11-5 is nothing to sneeze at, it’s likely that the entire coaching staff and Rivers will be welcomed back for another run at a good season.  No one wants the Colts to back slide to 5-11, so finding a way to incrementally improve will be the chosen path for a team with a bunch of good players led by a good quarterback.

This isn’t to call out the Colts as a pretender among contenders, and it’s certainly not to dog out Rivers for being a slightly diminished version of who he was at his best with the Chargers.  The Colts are in a position envied by every .500 or worse team in the NFL and Rivers is solidly in the middle of the pack among NFL starters, but if they want to achieve greatness, good is not the way to get there.  Terrible isn’t necessarily the way to get there either – the Jets are the Jets for a reason – but the Jags have sucked their way into Trevor Lawrence and that might make them very good very quickly.

It’s hard to be the Chiefs when the Chiefs are already doing a great job of that.  Finding the next great franchise quarterback is a job to which most of the 32 NFL teams devote significant effort.  The Colts are not alone there.  If it was easy, every team would have one and every team would finish 8-8.

The Colts are what they are, just as Rivers is who he is.  They and he are unlikely to ever be bad, but they are also unlikely to be great.  If the Colts are ever going to win another championship, they need to find the right answer at quarterback.

2 thoughts on “Indianapolis Colts – Good is the enemy of great, and Philip Rivers is the king of good”